John Bright was one of the longest serving Victorian radical politicians. Born in 1811 to a manufacturing family, his first entrance into politics came in the 1830s in the temperance movement, which argued that alcoholic drinks should be banned. He was soon drawn to radical causes, such as the movement against the Corn Laws – government measures which kept food prices high.

Bright became an MP in 1843 (for Durham). He soon gained a reputation in Parliament for his strong attacks on his opponents. In the 1860s his politics became more radical. Always a supporter of parliamentary reform, at this time he thought that at least some working class people should be able to vote. He supported the Reform League (see Marylebone, London). Bright was an important speaker in the 1865-68 Parliament debates on reform. He added amendments to the Conservative Reform Bill to give the vote to more working class men.

Bright also argued for the secret ballot. Before 1872, everyone knew which candidate people had voted for. Bright believed that this meant people were more open to intimidation – especially working class men who could lose their jobs or houses if they voted against their employer’s or landlord’s wishes. His brother-in-law, Edward Aldam Leatham, introduced in 1870 the bill which eventually led to the introduction of secret ballots.

The Secret Ballot Act has been seen as one of the most important democratic changes, although corruption still took place before later reforms in the 1880-1885 Parliament.

Bright became a cabinet member for the first time in 1868. He was an MP until his death in 1889. A funeral service was held for him in Westminster Abbey. He is remembered as ‘honest’ John Bright, and one of the ‘most effective’ Victorian radical speakers. 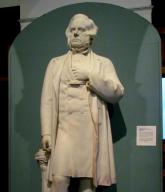