Birmingham was one of the growing industrial towns that did not elect an MP before 1832. The town was an expanding manufacturing centre that produced:
every metallic article’: keys and locks, pins, hinges and bolts, wire, chains, tubes, buckles, guns, steel pens, files, swords, tea trays, toys, screws, buttons, brassware, watches, cast iron, japanned and plated goods, and many others.

The town was one of the centres of campaigning for electoral reform. A campaign was launched to take the right to elect MPs away from the rotten borough of East Retford and instead let Birmingham elect these two MPs. The plan was rejected in 1827. A local banker and campaigner, Thomas Attwood, decided to build more popular support for the reform campaign.

At a public meeting on 25 January 1830 the Birmingham Political Union (BPU) was formed. The BPU intended to use peaceful methods, such as petitioning and mass meetings, to gather support for parliamentary reform, and once Earl Grey became Prime Minister it wholeheartedly supported the Reform Bill. Some historians have argued that there were few tensions between the middle and working classes in the city, whereas others have suggested that it was a ‘temporary alliance’ intended to just promote reform. Either way the BPU was extremely successful in rallying middle and working class support for the Reform Bill. Its peaceful methods were copied throughout the country.

In 1832 Birmingham gained two parliamentary seats – yet the town of 142,251 still only had 4,000 electors. Radical politics remained popular and Attwood, leader of the BPU, was one of the first MPs elected for Birmingham. Shortly afterwards the town also gained its first elected local council.

Attwood and others soon became disillusioned with Parliament. In the city, working class people did not see their lives improving. The BPU was restarted in the late 1830s and soon became involved in Chartism, the working class movement that argued for votes for all men and working class involvement in politics. Attwood was chosen to present the first Chartist petition to Parliament.

However, the middle-class members of the BPU were uneasy with Chartism, not agreeing with all of their aims. That summer, national Chartist meetings were held in the Bull Ring in Birmingham. The middle class leaders, who controlled the town council, were afraid of the movement. They used police from London and special constables to break up meetings and arrest speakers. In the tension after Parliament rejected the first Chartist petition, this led to the ‘Bull Ring riots’ in July 1839. Damage costing over £20,000 was caused and many Chartists were arrested and transported to Australia.

Birmingham continued to grow, but thanks to the splits between the reformers became less politically radical. 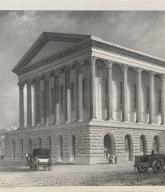 Birmingham was known as the ‘toy shop of Europe’ thanks to the levels of manufacturing.