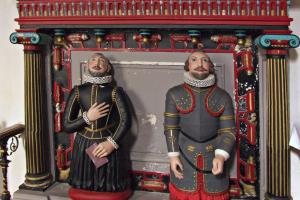 Lovelace’s father acted as deputy for Charles Howard I, 2nd Baron Howard of Effingham, in the lieutenancy of the castle and forest of Windsor, and seems to have shared the traditional puritanism of Windsor town; in his will he described himself as ‘a true and faithful member of the mystical body of Jesus’, and made a bequest to his ‘very loving friend’ and counsellor Edward Hake, the puritan satirist. While his father acted for Howard at home, Lovelace may have served with Howard on the naval expedition of 1596: his family’s wealth was attributed by Fuller to Spanish silver. Perhaps he distinguished himself in the sight of the Earl of Essex, for he was soon serving in Ireland as a trusted captain of the Earl. ‘Mr. Lovelace, the pensioner’, was knighted by Essex in September 1599.

Lovelace was close enough to Essex to be arrested on suspicion of complicity in the rebellion of February 1601. He was quick to protest that it was with the delegation from the Privy Council that he had gone to Essex House on the fatal day, and that he had been shut in with the councillors, while the ‘rebellion’ was in progress. ‘If I have given cause to be imprisoned, let death be my reward’, he wrote to Sir Robert Cecil. ‘If not, suffer not my name to be spotted with such malefactors as are now in question. I am most willingest to give myself unto your Honour, if you will be pleased to accept of me, and as to Essex I was, so long as he was noble, so shall I be unto you.’

His protestation of innocence was apparently more successful than the very similar one made by his Berkshire neighbour, Francis Knollys, for while the great Berkshire families, the Untons, Nevilles, Norrises and Knollyses, were in eclipse on account of their implication in the rebellion or the recent death of their leading members, Lovelace and his stepson (or future stepson), George Hyde, were chosen knights for the 1601 Parliament. More positive reasons for Lovelace’s return than lack of competition, were his father’s recent or imminent gift to him of Hurley, ‘for his advancement in marriage’ with George Hyde’s mother, and the extra influence which the Hyde connexion brought. It was probably due to the Hydes that Lovelace was returned for Abingdon in 1604. He is not mentioned by name in the parliamentary journals for 1601, but his position as knight for Berkshire entitled him to attend the main business committee (3 Nov.), a cloth committee (18 Nov.) and the monopolies committee (23 Nov.).

Lovelace’s second wife brought him more property in Oxfordshire. It was said at his death on 22 Apr. 1934, that