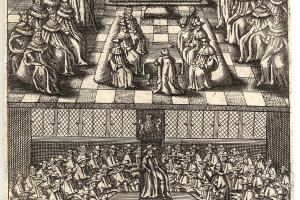 Parliament in 1643, from An Exact Collection of all Remonstrances...
View image (will open as a pop-up window)

The Short Parliament was so called because it sat for less than a month. It was Charles I’s fourth Parliament, and was summoned by him late in 1639 after a period of some eleven years in which he had governed without recourse to the two Houses – a period referred to as the Personal Rule. After his experiences with his last Parliament the king had been reluctant to call another, and remained so in 1639. However, since 1637 he had been locked in violent dispute with his subjects in Scotland after trying to foist on them a new, and in their eyes ‘popish’, prayer book. In the summer of 1639 he had raised an army in an effort to defeat these Scottish rebels, known as the Covenanters, only to be forced into a humiliating peace. Now more determined than ever to regain control of his northern kingdom, he allowed himself to be persuaded by his chief minister and lord deputy of Ireland, Viscount Wentworth (soon to be created earl of Strafford), that the only way to raise the necessary funds and political support for a resumption of war was by calling a new English Parliament. Wentworth assured the king that he would be able to manage the two Houses as effectively as he had the Irish Parliament.

The elections for the Short Parliament took place from 2 March to 6 April 1640. The prospect of a new Parliament generated a considerable amount of interest. Inevitably, the turnover of Members was high after eleven years without a Parliament in session. Despite a widespread perception that Charles was in thrall to ‘evil counsellors’ and that church and state were in need of thorough reformation, most of the electoral disputes seem to have been between self-proclaimed reformers, and to have turned largely on local issues. But where there was a contest that pitted reformers against candidates who were closely identified with the government it was usually the former who prevailed.

The key issue, once the Parliament had assembled on 13 April, was money. The king was adamant that before he would consent to the redress of any grievances the two Houses must vote a sufficient sum for him to resume his war against the Covenanters. To his more loyal Parliament-men and those who regarded all Puritans and Covenanters as arrant rebels, the honour of both king and kingdom demanded this act of good faith. Unfortunately for Charles, the two Houses contained a knot of his most influential opponents – among them the puritans and future parliamentarian leaders John Hampden, John Pym, and Sir Henry Vane II – who sympathised strongly with the Covenanters’ cause. More problematic still were the many more Parliament-men who, without necessarily favouring the Covenanters, were deeply concerned by the authoritarian nature of royal policies. Both groups were determined that the king should agree to legislation for reforming the kingdom’s ‘abuses’ before the Houses voted him any money.

This stand-off over redress and supply came to a head on 4 May 1640, when the king offered to give up Ship Money – the most hated of his ‘arbitrary’ taxes – if the Commons would agree to vote him twelve subsidies, or about £650,000. Strafford and other leading courtiers mobilised their allies in the Commons in support of this gambit. But it quickly became clear that the surrender of Ship Money would not be enough to satisfy MPs’ demands for reform. After a long and ill-tempered debate the Commons adjourned, resolving to continue its deliberations the next day. The king, however, had heard enough. Confident that he could raise the necessary money by other means, including a loan from Catholic Spain, he dissolved Parliament on 5 May 1640. Whether the Covenanters’ friends at Westminster were instrumental in fomenting opposition to the king’s offer of 4 May is not clear. But several of them were arrested and had their houses searched for incriminating evidence in the days that followed.

The failure of the Short Parliament and of negotiations for a Spanish loan effectively doomed Charles’s war against the Covenanters and his experiment in ruling without Parliaments. Under-funded and demoralised, his hastily assembled forces were defeated by the Covenanters at the battle of Newburn, near Newcastle, in August 1640. With the Scots occupying much of north-eastern England and his exchequer empty, Charles succumbed to pressure from the Covenanters and their English allies to call a new general election, for only Parliament could raise the necessary money to pay off the Scots. The result, in November 1640, was the so-called Long Parliament, which was to sit more or less continuously for the next twelve and a half years.