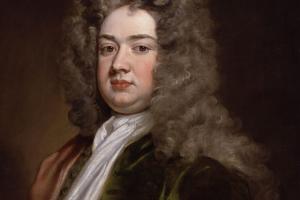 Cornwallis was brought up in the household of his grandfather Sir Stephen Fox, who paid for his education (to the tune of at least £4,000) and tried to safeguard his inheritance from the effects of his father’s extravagance. Cornwallis saw action as a volunteer in the Low Countries before being returned on the family’s interest for Eye, participating altogether in four campaigns. His father was a strong Whig, and he himself was forecast as likely to support the Court in the divisions on 31 Jan. 1696 over the proposed council of trade. He signed the Association promptly, and voted for fixing the price of guineas at 22s. in March. In 1697 he was granted a pension of £1,000 p.a. for life, to begin in 1701. On 31 Mar. 1698 he was granted ten days’ leave of absence, presumably on account of his father’s failing health. After succeeding to the barony he voted consistently with the Whigs in the House of Lords, for which he was deprived of his local offices in 1703. ‘A gentleman of sweet disposition, a great lover of the constitution, and well esteemed in his native county’, was how he was characterized in Macky’s Memoirs, while his physical appearance was described as ‘inclining to fat, fair complexion’. As a peer he associated himself with the Whig Junto, although maintaining his close relationship with Fox, who not only continued to provide him with a home, and found for him a wealthy bride, but by various other means and at further considerable expense guided him to financial solvency. In return, until 1710 Cornwallis reserved one seat at Eye, now more or less his pocket borough, for Fox’s connexion, Hon. Spencer Compton*.4