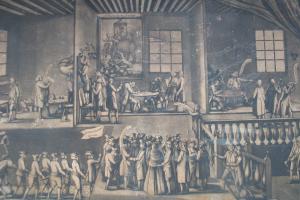 in inhabitants paying scot and lot

Shaftesbury, wrote Lord Ilchester to Newcastle on 13 Aug. 1754, was a ‘troublesome, expensive, and corrupt’ borough. For some time Ilchester had disputed its control with Lord Shaftesbury, but in 1747 they agreed each to nominate one Member; and by 1754 were ‘very good friends and upon good terms’.1

An historian of Shaftesbury writes about this agreement:2

These lords, or perhaps their agents, gradually becoming, in the estimation of many, somewhat arbitrary and less liberal in their connexions with the inhabitants, an opposite interest was created about the year 1761 by the unexpected introduction of what was termed an independent, or third, candidate.

Edward Drax, who stood on this interest in 1761, was defeated; but in 1768 William Chaffin Grove was successful at the expense of Ilchester’s candidate. At this election the custom started of ‘lending’ money to the electors against their note of hand—often employed where there was a struggle for concontrol and the voters could not be trusted.

In 1771 Francis Sykes, a nabob, standing on Lord Shaftesbury’s interest, defeated H. W. Mortimer, the independent candidate. A fortnight later Lord Shaftesbury died, leaving as his successor a boy of nine. Sykes now began to build up his own interest, and secured control of the corporation. In 1774 he stood, supported by the Shaftesbury interest, in partnership with another nabob, Thomas Rumbold, who was Ilchester’s candidate. The election was riotous and expensive—Sykes and Rumbold are said to have paid 20 guineas a man. They were unseated on petition, Mortimer was declared elected, and the second seat was declared vacant. The committee which tried the petition drew the attention of the House to the ‘most notorious bribery and corruption’ which had been practised; and a bill to incapacitate certain voters was brought in, but eventually dropped. Mortimer secured £11,000 damages against Sykes for bribery, which he used to buy houses in the town—obviously to strengthen his interest.

The borough was now becoming too expensive for the old-established interests. Ilchester sold most of his property to Sykes; and the Shaftesbury interest, having failed to carry Bartholomew Bouverie in 1776, ceased to be of importance. In 1780 it was a fight between two nabobs and two candidates on the independent interest. The nabobs won, but on petition Rumbold lost his seat to Mortimer.

By 1784 Mortimer had wrested from Sykes control over the corporation, and both independent candidates were successful on the poll. So strong was Mortimer now that in 1786 he was able to secure the uncontested return of John Drummond, the first candidate to be returned unopposed since 1754. Before 1790 Sykes sold his property at Shaftesbury to John Call, acting on behalf of Paul Benfield; and there arose a new interest in the borough.