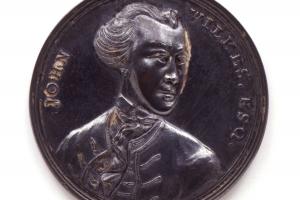 Colonel Wilkes of the Buckinghamshire militia dined with us ... I scarcely ever met with a better companion; he has inexhaustible spirits, infinite wit and humour, and a great deal of knowledge; but a thorough profligate in principle as in practice; his character is infamous, his life stained with every vice, and his conversation full of blasphemy and bawdy. These morals he glories in, for shame is a weakness he has long since surmounted. He told us himself that in this time of public dissension he was resolved to make his fortune. Upon this noble principle he has connected himself closely with Lord Temple and Mr. Pitt, [and] commenced public adversary to Lord Bute, whom he abuses weekly in the North Briton.

I became acquainted with Wilkes by our meeting together in the House of Commons. He has great vivacity, but in sentiment and morals rather tending to the profligate and debauched. His constant flow of mirth and humour gives him an opportunity of saying almost what he pleases of all men to all men.

Yet he could attract men of the most respectable character; and William Dowdeswell, his fellow student at Leyden, thought that people were inclined to think much worse of him than he really deserved.3 Few could have been more prejudiced against him than Johnson, and when they met at Dilly’s dinner party in 1776 Wilkes exerted himself to win Johnson over.

Mr. Wilkes placed himself next to Dr. Johnson [writes Boswell] and behaved to him with so much attention and politeness that he gained upon him insensibly. No man eat more heartily than Johnson, or loved better what was nice and delicate. Mr. Wilkes was very assiduous in helping him to some fine veal. ‘Pray give me leave, Sir—It is better here—A little of the brown—Some fat, Sir—A little of the stuffing—Some gravy—Let me have the pleasure of giving you some butter—Allow me to recommend a squeeze of this orange—or the lemon, perhaps, may have more zest.’ ‘Sir, Sir, I am obliged to you, Sir’, cried Johnson, bowing, and turning his head to him with a look for some time of ‘surly virtue’ but, in a short while, of complacency.

‘Did we not hear so much said of Jack Wilkes we should think more highly of his conversation’, said Johnson on another occasion. ‘Jack has great variety of talk, Jack is a scholar, and Jack has the manners of a gentleman.’4

His early extravagance, an expensive contest at Berwick-on-Tweed in 1754, and the cultivation of an interest at Aylesbury, had by 1762 brought him into serious financial difficulties. The resignation of his friends Pitt and Temple spoiled his chance of obtaining office, and he turned to the congenial occupation of journalism to forward his fortunes. It brought him notoriety, which he welcomed unabashed; but, following his arrest for libel and release on habeas corpus, he committed a tactical mistake by withdrawing to France. He was expelled the House on 20 Jan. 1764. The Opposition took up with zest his expulsion and the issue of general warrants; but disowned the man, and rejoiced that they were not incommoded by his presence.

Wilkes spent almost five years on the Continent, helped financially by friends and political sympathizers in England, but in growing poverty and frustration. Those who wished to help him encountered two obstacles: the King’s dislike, and Wilkes’s extravagant pretensions. ‘Lord Rockingham is extremely averse for asking anything for him from the King’, wrote Edmund Burke (to his brother Richard) in January 1766, ‘at the same time that he is willing to do almost anything for him from his private pocket.’ But Wilkes had written to George Onslow on 12 Dec. 1765:

Mr. Fitzherbert has offered me in the name of some of the present ministry the annual sum of £1,000, to be paid out of the income of their respective places. I have rejected this proposal as clandestine, eleemosynary, and precarious. I demand from the justice of my friends a full pardon under the Great Seal for having successfully served my country.5

He added further demands of £5,000 compensation for his imprisonment and a pension of £1,500 per annum—which he must have known no Administration could grant.

In February 1768, his resources at an end and resolved to risk a desperate throw, he returned to England. ‘What the Devil have I to do with prudence?’, he is reported to have said.6 ‘I owe money in France, am an outlaw in England, hated by the King, the Parliament, and the bench of bishops ... I must raise a dust or starve in a gaol.’ Asked what were his qualifications for standing for London, he replied: ‘General warrants and the good nature of my fellow citizens.’ Defeated for London, he was returned head of the poll for Middlesex. His imprisonment for blasphemy and libel, his repeated expulsions from the House of Commons, and finally the seating of his defeated rival Henry Lawes Luttrell was a small price to pay for his popularity with the freeholders of Middlesex. His debts were paid off by subscription, a party under his lead was formed in the City of London, and he could be assured that no Government could prevent his return for Middlesex at the next general election. Wilkes became the martyr of the London radicals and the idol of the London mob; and over the printers’ case in 1771 was able to defy the House of Commons with impunity.

The liberty of all peers and gentlemen, and (what touches me most sensibly) that of all the middling and inferior set of people who stand most in need of protection, is, in my case, this day to be finally decided upon.

He was a symbol to which the London mob rallied; yet he showed no sympathy with their economic grievances, and took resolute action against them during the Gordon riots. But he adopted the radical demands of the urban middle class: shorter Parliaments, exclusion of placemen and pensioners from the House, parliamentary reform, and pro-Americanism. ‘An incomparable comedian in all he said and did’, wrote Wraxall,8‘... he seemed to consider human life itself as a mere comedy’; and Boswell:9 ‘he has an elasticity of mind that nothing can crush’. Burke, who took life very seriously, wrote to Rockingham on 7 Nov. 1773 about the lord mayor’s banquet:

As to Wilkes I cannot be persuaded but that in the end he will jest and buffoon himself out of his consequence. His petulance and levity are something beyond what is credible. I sat near him and he was ridiculing and abusing his adherents without any management, and in the hearing of several people. I hinted to him jestingly that his friends by being such were too respectable not to be treated with a little decorum. Oh, says he, I never laugh at my friends, but these are only my followers.

And Gibbon thus reported his speech of 22 Feb. 1775 on the motion to expunge from the journals the resolutions on the Middlesex election (a motion Wilkes made every year until it was finally carried in 1782):10 ‘I ... sat by the lord mayor, who spoke well and with temper, but before the end of the debate fell fast asleep.’ On another occasion, after having abused North, he is reported to have added sotto voce that ‘he was forced to say so to please the fellows who followed him’.11 For the Rockinghams he had nothing but contempt. He told James Harris on 15 May 177712 ‘that the Americans thought their friends in England so profligate they would not trust them, that a good cause had been defended there by cowards’. And

speaking of Burke and other orators apparently vehement, mentioned a story he had heard from D’Alembert concerning a missionary who laughed to think he could make twenty thousand men believe what he did not believe a syllable of himself.

In 1779 Wilkes was elected at the fourth attempt to the lucrative office of chamberlain of the City of London. He had now secured a competency, and the Wilkite movement was on the way out. Though he never formally discarded his radicalism, his voting record in the last seven years of his parliamentary career was such as George III himself would have approved: he supported Shelburne’s peace preliminaries, spoke and voted against Fox’s East India bill, came out strongly for Pitt in 1784, and in one of his last speeches in Parliament opposed the impeachment of Warren Hastings. At the general election of 1790 his popularity in Middlesex had sunk so low that he was forced to decline the poll.