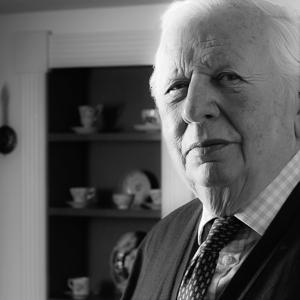 James Michael Leathes Prior was born on 11 October 1927 and grew up in Norwich. He was educated at Charterhouse School, Surrey and Pembroke College, Cambridge. In 1954 he married Jane Gifford.

At Cambridge, Prior did not join the Union or a political party. He became a professional farmer, and had little political experience when, on his first attempt, he was elected to represent Lowestoft in 1959. He became Minister of Agriculture, Fisheries and Food (1970-1972) and Leader of the House of Commons (1972-1974). During Margaret Thatcher’s government he was Secretary of State for Employment (1979-1981) and Secretary of State for Northern Ireland (1981-1984), although he was regarded as out of sympathy with some of the views of the Prime Minister and the right of the conservative party.

He stood down from the House of Commons in 1987 and was made a life peer as Baron Prior of Brampton in the County of Suffolk. Jim Prior passed away on 12 December 2016.

Click here to listen to the full interview with James Prior in the British Library.

The other thing of course is that there was no PR, no company had PR people in those days who would spend their time trying to persuade Members of Parliament about the needs of their company or anything like that. There was an old boy, a Commander, Campbell, I think he was called, who was also a lawyer and had his offices just by Westminster Abbey there and when there was a Private Member’s Bill he would help to suggest suitable subjects for a Private Member’s Bill, and you might get a note from him occasionally about some important issues that people were worried about. But, I mean, there was no lobbying of the sort that there is now. Here am I now having not being near Parliament, having had a leave of absence for the last two years, really done very little in the House of Lords ever, I’m still getting invitations to I think four or five different functions a day which would take place or will take place in either the House of Commons or the House of Lords or somewhere which are of interest to a particular group. I mean the whole thing has changed enormously…For me it was quite staggering that…before I went to Northern Island I was hardly ever conscious of it, and I spent three years in Northern Island as the Secretary of State there and when I came back to Parliament after that period, you are isolated from politics when you are in Northern Island, when I came back I noticed an enormous change and the PR was really beginning to be of great importance…Industry felt that it had to get its view across more…the other thing was the whole sort of charity movement and not just those – charities used to just be associated with trying to raise money, but then charities became much more pressure groups than just raising money and the pressure group side would be very active, at that time became very active in parliament and a pressure group would not operate directly with Parliament, would operated through the constituencies and the newspapers and getting people to write to Members of Parliament and so on.