Home About the History of Parliament > Staff > Dr Linda Clark 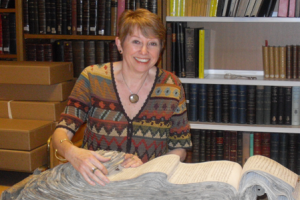 The section 1422-1504 is to be published in two parts: 1422-61 and 1461-1504. We will soon recieve delivery of the first part, for which Linda has been editor. Her own work on the project focused on the representation of the counties of Berkshire, Dorset, Hampshire, Surrey, Sussex and Wiltshire and their parliamentary boroughs, adding up to a total of 39 constituencies and more than 750 biographies. Linda was also responsibile for directing the research of the other members of the team, and editing their biographies and constituency surveys for publication.

Linda retired from the History of Parliament Trust on 30 September 2019 after 50 year's service.

Besides being General Editor of The Fifteenth Century (a collection of essays published annually by Boydell and Brewer), she is one of the convenors of the Late Medieval History seminar at the Institute of Historical Research. Linda hopes one day to write a book about Henry Bourgchier (1408-83), earl of Essex and treasurer of England, who was the subject of my doctoral thesis.

- ed. (with Carole Rawcliffe), The Fifteenth Century XII: Society in an Age of Plague (Woodbridge, 2013),

- ed. The Fifteenth Century VII: Conflicts, Consequences and the Crown in the Late Middle Ages (Woodbridge, 2007),

- ed., Parchment and People: Parliament in the Middle Ages (Edinburgh, 2004),

- ‘Magnates and their Affinities in the Parliaments of 1386-1421’, in The McFarlane Legacy: Studies in Late Medieval Politics and Society, ed. R.H. Britnell and A.J. Pollard (Stroud, 1995),