Home About the History of Parliament > Staff > Dr Simon Healy 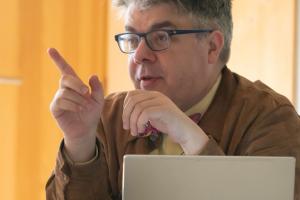 I am currently working on the appendix volume to Proceedings in Parliament 1624, researching, collating, transcribing and editing newsletters on parliamentary affairs in 1624.

My foremost research interest in recent years has been the study of Crown finances 1558-1642, arising from my PhD, Crown Revenues and the Political Culture of early Stuart England (Birkbeck College, London 2015) – available open source from the British Library’s EThOS website.

I am also interested in a wide range of other subjects, including:

The political uses of the early modern English legal system

Career paths in the post-Reformation Church of England

I have served as a convenor of the Tudor & Stuart seminar at the Institute of Historical Research, London since 2000.

I regularly give talks to academic seminars and conferences, and to amateur groups such as the Historical Association, U3A, local history societies and schools.

Publications outside the History of Parliament include:

‘The significance (and insignificance) of precedent in early Stuart Parliaments’ in Writing the History of Parliament in early modern England ed. P. Cavill and A. Gajda (Manchester UP, 2018)

‘Oh, what a lovely war? War, taxation and public opinion in England 1624-9’ in Canadian Journal of History XXXVIII (2003)