On this Day: 22 November 1830: The Formation of Earl Grey's Government

Listen to Dr Philip Salmon further discuss Earl Grey's government in 1830, and the amount of popular support for the 'Great' Reform Bill.

On 22 November 1830 the 2nd Earl Grey, remembered today for his tea blend as well as his Whig politics, took office as prime minister. Best known for the ‘Great’ Reform Act of 1832, Grey’s government is widely credited with setting Britain on the so-called ‘road to democracy’. There can be little doubt that the timing of this concession to popular feeling was pivotal in Britain’s political development. By extending the franchise and redistributing parliamentary seats, at a time of unprecedented social and economic unrest, Grey’s ministry was able to restore faith in the parliamentary system and re-legitimise the role and authority of the House of Commons. Mass political protests still took place, such as the campaign waged by the Chartists. But in striking contrast with most other European states, Britain avoided revolution and was able to develop its political institutions peacefully, much to the envy of many Continental observers.

This impressive legacy has understandably played a large part in shaping our modern view of both Lord Grey and his reforming coalition of 1830-34. At the time, however, things would have looked rather different. In some ways, Grey’s ministry was in fact almost the anti-thesis of the democratic heritage with which it has become associated.

Not only was it an extremely aristocratic government even by the standards of the time – one Tory famously denounced it as the ‘most aristocratic administration that ever was formed’ ­– but it was also incredibly nepotistic in its composition. All but one of the 13 cabinet members were either in the House of Lords or heirs to a peerage (for example, Grey's Chancellor and leader of the House of Commons was John Spencer, Viscount Althorp, who later became the 3rd Earl Spencer) while the lower ranks included vast numbers of Grey’s own family (for example. Grey's son Henry Grey, Viscount Howick was under-secretary of state for war and the colonies). Radical and reforming groups had long been demanding the abolition of tax-payer funded sinecures as part of their campaign against ‘Old Corruption’. The irony of Grey’s own relatives being appointed to lucrative posts collectively worth at least £20,000 a year was not lost on critics and cartoonists. One satirical print famously depicted Grey as a tom cat that had caught a fish (the premiership), with an enormous tail listing the government salaries of all his relatives. 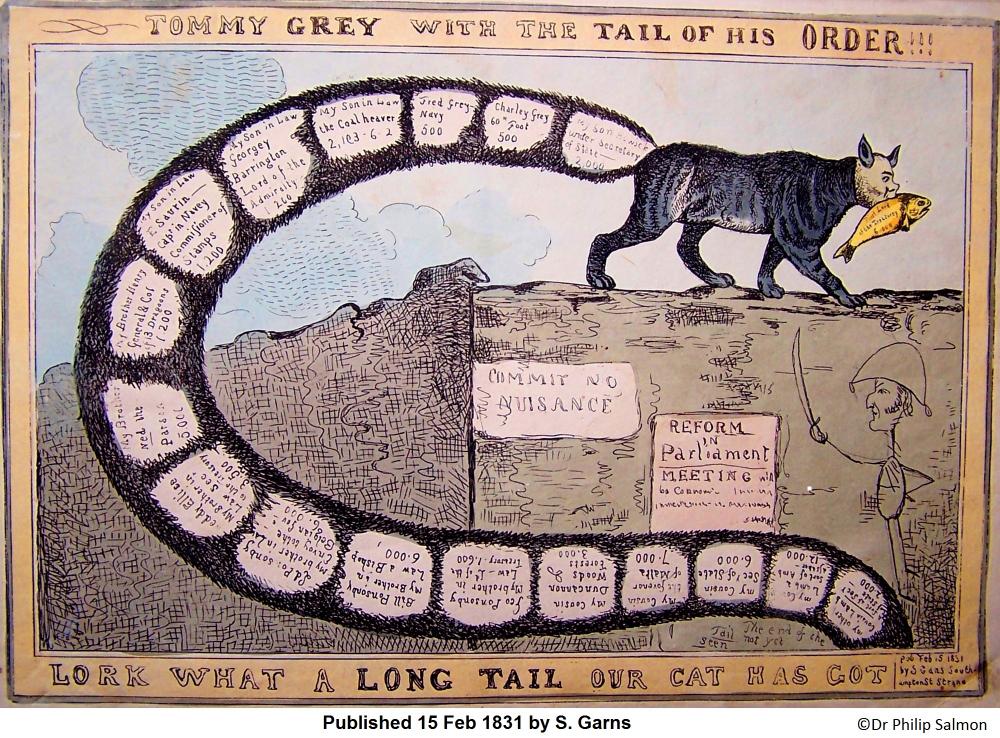 The manner in which Grey achieved office was also far from democratic, at least in the modern sense. Like most governments of the period, Grey’s ministry did not assume power as the direct result of winning a popular mandate in a general election, but instead was formed on the back of factional manoeuvrings within Westminster. In 1829 the previous government led by the Duke of Wellington had controversially lifted the restrictions on Catholics holding public office, upsetting many Protestant Ultra Tories and making him reliant on moderate Whig support. It was Wellington’s ill-judged declaration against any parliamentary reform, some three months after the 1830 general election, which alienated this group and made it impossible for him to carry on.

Grey’s ministry came to office committed to introducing a reform bill, and went on to win a landslide victory in the 1831 general election, which was triggered by a Tory attempt to wreck their proposals. The popular enthusiasm for their plan of reform and ‘the bill, the whole bill, and nothing but the bill’ went beyond anything previously encountered in British politics. It resulted in a nationwide movement that saw Grey and his leading Whig ministers – his son-in-law Lord Durham, Lord John Russell, Lord Brougham and Lord Althorp – fêted as national heroes. Commemorative products, such as the jugs below, were produced in their tens of thousands in support of the ministry and its reform bill. Pottery from this period is still referred to as reformware. 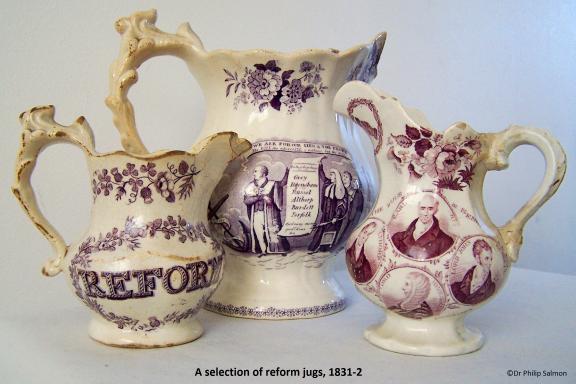 Of course not all the ministry’s policies were so successful or popular. Their economic reforms failed to cut expenditure and their tax alterations outraged the City and were promptly dropped. In Ireland, their enforced collection of tithes led to widespread civil unrest and the controversial suspension of habeas corpus. Disagreements over Irish Church reform eventually caused a split within the cabinet, prompting Grey to resign as PM in the summer of 1834.

During their four years in power, Grey’s ministry not only oversaw the passage of the famous ‘Great’ Reform Act. In 1833 they also abolished slavery throughout the British colonies, albeit with a period of indenture for slaves prior to emancipation and £20 million compensation to slave owners. Less than a year later, however, the ministry, in one of its final acts, would initiate a reform that would create a more ignominious legacy – the infamous Victorian workhouse system imposed by the New Poor Law.