Henry Stafford was the son of Henry Stafford, first Baron Stafford. He was part of a large and important family, based in Staffordshire and Shropshire. Yet he still had trouble being elected to Parliament.

His family may have been one of the reasons why he had difficulties. The Staffords were a family of divided loyalties and opposing religious beliefs. Henry’s grandfather had been executed for treason. His father, Baron Stafford, held some Protestant views early in Edward’s reign, but then changed his mind and became a strong supporter of Mary.

Henry Stafford’s siblings were divided. His sister Dorothy married a committed Protestant and fled with him to Europe when Mary became Queen. His brother Thomas did the same, but returned to England in 1557 attempting to launch a Protestant rebellion. We do not know if Henry was involved in the plot. Another brother though, Edward, seems to have been a Catholic, sitting in Parliament under Mary, but he was also an MP under Elizabeth.

It is hard to decipher Henry’s own religious convictions. He did not outwardly oppose Mary’s rule, so he may have been Catholic. Yet he became the Keeper of the Records in the Tower of London under the Protestant Elizabeth, and later succeeded to his father’s title. He died in 1566 without children. 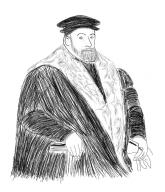 Stafford’s sister, Dorothy, was a favourite of Elizabeth I. She often slept in the same bed as the Queen.