Sir John Perrot was said to be the illegitimate son of Henry VIII, although many historians no longer believe this. He was born into a Welsh family with lands in Pembrokeshire. His father (if it was not Henry!) died young and he was raised by his Catholic stepfather. However, his stepfather sent him to a Protestant school in St David’s.

Perrott’s commitment to his Protestant faith was strong. He sat in Edward VI’s Parliaments and was a favoured courtier. After Edward’s death, it first looked as if he would make peace with Mary’s new Catholic regime but soon got into trouble with the government. He refused to hunt out Protestants in Pembrokeshire, and instead hid them in his house. He was known to oppose Mary’s legislation in Parliament and was arrested for alleged involvement in plots against Mary. Aware that Mary’s patience could soon run out, he joined the navy and fought in France.

After Mary died he was favoured by Elizabeth. He was given many grants of land in Pembrokeshire and he became an important local administrator. He began to rebuild Carew Castle and make it his home. Unfortunately, his violent, quarrelsome nature and his ambitious plans meant that he upset people, in Pembrokeshire and in London.

Perrott was twice made Lord Deputy (the Queen’s representative) of Ireland. His time there was difficult. In 1579 he was unable to stop Spanish soldiers from landing in Ireland and starting a rebellion against English rule. By the time he left the country for good in 1588 he had restored peace, but his ambitious administrative projects had failed and he had quarrelled with many of his former allies. On his return to Wales, during the year of the Spanish Armada, he was responsible for the defence of the South Wales coast.

By the late 1580s Perrott was running out of friends. He was charged with treason, on very little evidence, and was found guilty in 1592. He died in the Tower before he could either be executed or possibly pardoned. His son was allowed to inherit the family home. 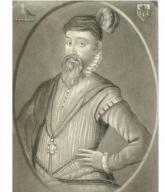 Sir John Perrott had a bad reputation for violence – he was first introduced to Henry VIII because of a brawl with two guards at court!