Thomas More was a famous scholar (writer and thinker) of the Tudor period. He was an important member of Henry VIII’s Privy Council but later opposed Henry VIII’s religious changes. For this, he was executed for treason. More was later made a Catholic saint because of this.

More was born in London, the son of a lawyer. He grew up in the household of the Archbishop of Canterbury, and later studied theology and law at the University of Oxford.

After university he established a successful legal practice in London, but he made he became well known as a scholar from the books that he wrote. His most famous work was ‘Utopia’, which imagined a perfect world and society. He had a large correspondence with many of the major scholars of the time, such as the famous Dutch writer Erasmus.

More’s growing fame led him to the service of the King, and he became a member of Henry VIII’s Privy Council. Despite this he still spoke for the Londoners he represented in Parliament, even after a riot in 1517. More played an important role in the 1523 Parliament and helped gain funding for Henry’s latest war in France.

In 1529 More became Lord Chancellor, replacing the King’s former chief minister, Cardinal Thomas Wolsey when he failed to secure Henry’s divorce from Catherine of Aragon.  More and Henry had a close friendship. This protected More, for a while, when he disagreed with Henry’s plans to become Supreme Head of the Church of England. By 1532, however, More could no longer support Henry’s religious changes and he decided to resign. Out of government, he devoted his time to publishing anti-Protestant texts.

More’s opposition to the religious changes became public in 1534, when he refused to swear the oath in the Act of Succession. For refusing to accept Henry as Supreme Head of the church he was charged with treason and tried in May 1535. Found guilty and executed on 6 July. Henry reduced his sentence from being hanged, drawn and quartered to a (gentler!) beheading.

More is a controversial figure. To some he is a martyr who died for his Catholic beliefs. However, his record of persecuting Protestants for heresy, which led to several being burnt at the stake, has harmed his reputation. 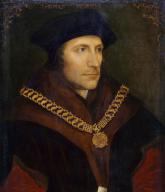 Thomas More considered becoming a monk in his early life. He lived at London Charterhouse with the monks for four years but never took vows – he chose to get married and have a family instead.