Cecil served in Parliaments under Henry VIII, Edward VI and Mary I. He became Elizabeth I’s most trusted minister, and played a major role in her government and her religious settlement.

Cecil was the son of one of Henry VIII’s minor courtiers. His father made sure that Cecil was well-educated at grammar school and Cambridge University, and this education helped make Cecil an excellent scholar, administrator, and Protestant reformer.

Cecil was a member of Edward VI’s Privy Council, but when Mary came to the throne he retired from public life. He did not want to implement Catholic policies. He mostly stayed out of trouble during Mary’s reign, but did, on occasion, speak against her. During this time he entered the service of Mary’s sister, Elizabeth.

When Elizabeth became Queen she immediately made Cecil an important government official, the Secretary of State. He played a vital role in her 1st Parliament, shepherding through the major religious laws. Cecil agreed with Elizabeth that England should be Protestant, but in such a way that would not upset a country that was divided by religion and had lived through many dramatic changes.

Cecil was Elizabeth’s most trusted advisor.  In 1570 he was even allowed to stamp documents with her signature without speaking to her first. Yet they did not always agree. Cecil was not afraid to use Parliament to put pressure on Elizabeth. For example he supported, and sometimes even wrote, the petitions Parliament made to Elizabeth asking her to marry. He also supported some of the Puritan attempts to further change Elizabeth’s religious settlement.

Cecil’s attitude towards Catholics hardened in later years, and he began to see them all as a threat to Elizabeth and Protestant England. This included Elizabeth’s cousin, Mary, Queen of Scots, and he was instrumental in Mary’s execution after the Elizabeth's 6th Parliament. For this, he was banished from Elizabeth’s sight for four months.

In 1571 Cecil became Lord Burghley, and moved into the House of Lords. He still used his influence in Parliament to push through Elizabeth’s business. He died at home on 4 August 1598, one of the most important statesmen of the whole Tudor period. 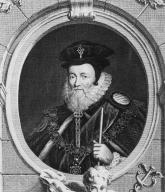 As Secretary of State, Cecil dealt with almost all of Elizabeth’s formal correspondence. He managed to do this with the help of just six assistants!