Tudor Kent was a prosperous county. It had good farmland, strong industries (such as cloth, paper and shipbuilding) and was strategically important because of its ports. These ports also gave the county a link to the mainland Europe.

The Reformation in Kent was not always popular. A lot of land in the county was owned by the church, and much of it was sold off during the dissolution of the monasteries. For years, pilgrims had prayed at the famous (and very rich) tomb of Saint Thomas Beckett in Canterbury. It was dismantled. In 1533 Elizabeth Barton, the ‘Holy Maid of Kent’ had a series of visions of terrible things that would happen if Henry VIII continued with his religious changes. It is now believed she suffered from epilepsy, but at the time people believed that her fits were signs of visions from God. Under the control of monks unhappy with the religious changes, she prophesised that Henry VIII would die if he married Anne Boleyn. She and her sponsors were arrested and hanged in 1534 for fraud.

The Protestant Archbishop of Canterbury, Thomas Cranmer, had an important effect on the city of Canterbury. He helped make sure that the religious changes of Edward’s reign were carried out across the county, and was initially very unpopular in Canterbury for doing so.

However, Protestantism began to take root in the county. Many of the county’s MPs were close to Edward VI’s government, and several were related to Lady Jane Grey. In 1554, Sir Thomas Wyatt led a rebellion in the county against Mary I. Wyatt said he was rebelling against the Queen’s proposed marriage to Philip of Spain:

Forasmuch as it is now spread abroad ... of the Queen's determinate pleasure to marry with a stranger ....no other earthly cause could move us to this enterprise ... wherin we seek no harm to the Queen.

The rebels marched to London. However, the capital stayed loyal to Mary and Wyatt was executed for treason. In Kent, 150 people were hanged and 303 received pardons. Historians have disagreed about whether the causes of the rebellion were political or religious. There was certainly a desire to prevent Mary from marrying Philip of Spain, and some argue that this was the main reason for the rebellion. However, others have shown how there were many Protestant churchmen involved in the plot, and it is known that many of the rebels wanted to replace Mary I with the Protestant Elizabeth.

By the time of Mary’s reign Protestantism certainly had a strong presence in Kent. A number of Protestant refugees arrived in Canterbury from the continent, and by 1548 even had their own church in the town. 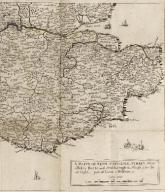 During Mary’s reign 70 people in Kent were burnt at the stake for heresy, one of the largest numbers across the country.