After the Elizabethan religious settlement, pressure grew in the country for further reforms.

More radical Protestants, known as Puritans, wanted the Church of England to stop every practice that even looked like Catholicism, such as priests wearing traditional robes or the use of music in services.

Legislation was also passed in this Parliament to publish a Bible in Welsh. A New Testament and the Book of Common Prayer in Welsh was first published in 1567.

As this Parliament continued, MPs tried to pass more religious bills, and to persuade Elizabeth to get married. Elizabeth was unhappy with both. She refused to answer questions about her marriage, and argued that religious debate was not appropriate. As she was Supreme Governor of the church, only she decided what religious laws were passed. This became a pattern for many of Elizabeth’s parliaments! 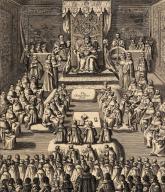 In 1562 Elizabeth nearly died from smallpox. Aside from causing many concerns about who would inherit the throne if Elizabeth died, the disease had other effects. Elizabeth wore more make-up to hide the scars, including painting her face with a mixture of lead and vinegar. This gave her the pale look we know so well!