In this Parliament MPs tried to change Elizabeth’s religious settlement. Some Puritan MPs such as Walter Strickland even tried to issue a new Book of Common Prayer. Elizabeth was very angry and members of the Privy Council stopped these debates and Strickland was briefly removed from Parliament.

Parliament did agree that all priests should follow the teachings decided by the Church of England. These were known as the ’39 articles’, and were moderately Protestant. If a priest did not follow these he could be removed. An attempt to pass anti-Catholic laws, however, was vetoed by Elizabeth. 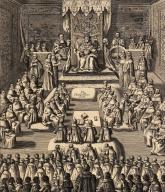 By this period Elizabeth was under threat from Catholics at home and abroad. In 1570 Pope Pius V excommunicated Elizabeth. This meant she was formally expelled from the church, and good Catholics had a duty to oppose her. After this the danger from Catholic plots increased.