This Parliament met when England was under threat from Catholic plots and conspiracies – those who wished to make England a Catholic country again. Many of these plots surrounded Elizabeth’s Catholic cousin (and closest relative) Mary, Queen of Scots. Mary had been forced to abdicate her Scottish throne in favour of her son, James (the future James I), and in 1568 she fled to England. Unsure of how to deal with her, she was kept under house arrest.

There were several plots that attempted to release Mary and place her on the throne instead of Elizabeth. She was thought to be involved in many of these, and by 1585 there was undeniable evidence that she was personally involved in one, the Babington Plot. Her fellow conspirators were executed, and a special commission found Mary guilty. Elizabeth, however, was reluctant to execute her cousin. She feared international reaction, especially from Spain, if a royal princess was killed.

This Parliament was called specially to deal with Mary. Some members of Elizabeth’s Privy Council, including Elizabeth’s chief minister William Cecil, felt strongly very strongly that Mary should be executed in order to prevent further plots against Elizabeth. They used Parliament to try and push Elizabeth into condemning her cousin to death.

In November Parliament petitioned Elizabeth to do this. Elizabeth received a delegation from Parliament, but she stalled for time and would not give a direct answer. She finally signed Mary’s death warrant on 1 February 1587, but immediately changed her mind. Elizabeth’s ministers, especially Cecil, acted quickly and Mary was executed on 8 February. Elizabeth was furious, and refused to speak to Cecil for four months.

Elizabeth was right to worry about the consequences of the execution of Mary, Queen of Scots. In response, Philip of Spain sent the Spanish Armada to invade England and overthrow Elizabeth. A combination of the English navy and bad weather, however, prevented the Armada from linking with Philip’s army in France and landing on the English shore. Elizabeth had survived a major Catholic invasion attempt. 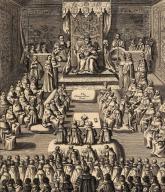 The destruction of the Armada was greatly helped by the weather. The fleet tried to return to Spain by sailing around the British Isles. However, large gales blew the fleet off course. Over 5000 men died, and only half the ships arrived back in Spain. His was seen as God’s approval for Protestant England. The victory medal said ‘God blew, and they were scattered’.