Henry VIII’s fifth parliament is known as the ‘Reformation Parliament’. It passed the first laws of the Reformation and some of the most important. Henry called it to pressurise the Pope in Rome into granting Henry’s divorce from Catherine of Aragon. It ended up with the English church separating from Catholicism.

At first Henry used Parliament to attack the church and to question the Pope’s power in England. Parliament attacked church courts, which at that time dealt with moral offences such as adultery or witchcraft, claiming they were abusing their powers. Henry charged the members of the English church of being loyal to the Pope, rather than Henry. The King forgave the church, in return for them paying a fine of £118,000.

These measures did not change the Pope’s attitude, who still would not grant Henry’s divorce. Henry decided to state that the Pope did not have any power in England at all. The church was forced to agree that Henry was the ‘Protector and Supreme Head of the English church and clergy, so far as the law of God allows’. On 15 May 1532 the English church gave up the power to make church law without the King’s consent, in a document called the Submission of the Clergy.

- 1533: the Act of Restraint of Appeals meant that people could not appeal to the Pope to overturn Henry’s rulings on the church. It stated ‘This Realm of England is an Empire’, and that the Pope had no right to interfere in its business. More importantly, it meant that Henry’s divorce could go ahead, and he was free to marry Anne Boleyn. On 28 May 1553, Archbishop Thomas Cranmer declared that Henry’s marriage to Catherine was void (was ended), and his marriage to Anne valid.

- 1534: the Act of Succession made Anne’s daughter, Elizabeth, Henry’s heir, and declared her half-sister, Mary, illegitimate. (This was later changed. When he died, Henry named his three children as his heirs: Edward, Mary and Elizabeth)

- 1534: The Act of Supremacy stated that Henry had always been the ‘Supreme Head’ of the Church of England and Henry and his government took control of the Church.

- 1534: The Act of Annates awarded church taxes ( a tax raised by the church from ordinary people) that had gone to Rome to the King instead.

Reformers, such as the King’s adviser Thomas Cromwell, were extremely important in this Parliament. Cromwell himself pushed through most of the King’s legislation, and outside the Parliament he and other Protestants began to promote new ideas in the church, such as the use of the English Bible.

Many of these acts were unpopular at first. Thomas More was executed for refusing to accept Henry as the Supreme Head of the church. In 1536 the largest uprising of the Tudor period took place: the Pilgrimage of Grace. The rising began in Lincolnshire and soon spread all across the north, to places such as Knaresborough, Yorkshire. Thousands of people called for a return to the old church. Nevertheless, the King was unmoved. Cromwell organised a propaganda campaign to convince ordinary people that the Pope had no rights over the church in England.

Yet the changes made by this Parliament were hugely important. The English Church had left the Roman Catholic Church, and the Pope was no longer in charge of religious affairs in England, instead it was the monarch (King) as its Supreme Head. Much of the church’s wealth had been transferred to the crown. 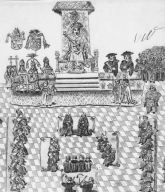 There were 308 executions for treason in Henry VIII’s reign, and on top of that Protestants were burnt at the stake for heresy. This was far more than the Protestants later killed by ‘Bloody Mary’, Queen Mary I.