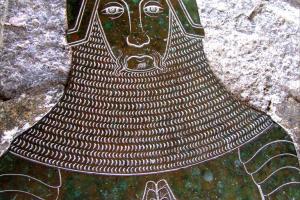 The Burgates took their name from the township lying two miles west of Eye in Suffolk, where their ancestors had settled before the reign of Henry III. In 1361 two knights’ fees in Burgate, held of the earl of Oxford, were in the possession of the ‘lady of Burgate’, William’s mother or grandmother, but within ten years they came into his own hands. In the course of his lifetime Burgate entered into several transactions concerning property at Burgate, Rickinghall and Redgrave. He extended his territorial interests in the same area of Suffolk by acquiring from Richard Church* two manors in Gislingham, which he retained for several years after 1381, and also a number of properties in Thornham, Finningham, Wyverstone, Mellis and Yaxley, although the records do not always make clear as to whom, Burgate or Church, the actual tenancy pertained. Through his paternal grandmother, Margaret, widow of Robert Swynford (d.1349), he inherited property in Huntingdonshire at Great Stuckeley, Little Stuckeley and Ripton, albeit not without having to bring a suit at the assizes in 1380 to prove his title. These holdings in Huntingdonshire were to be valued at over £16 a year after Burgate’s death. Burgate’s standing in East Anglia was doubtless enhanced by his marriage to Eleanor Visdelou, who came from an old-established Norfolk family.2

Burgate may have owed his elections to Parliament to his friendship with the influential family of Wingfield. In 1378 he witnessed at Cotton a transaction completed by Sir William Wingfield*, whereby certain lands were put into the hands of feoffees headed by Wingfield’s kinsman by marriage Michael, Lord de la Pole (later earl of Suffolk); and in 1384 and 1385, during de la Pole’s chancellorship, Burgate’s name appeared with Wingfield’s among the witnesses to documents concerning the property of John Bacon of Brome, the King’s secretary. Perhaps surprisingly, when Burgate was first elected as knight of the shire, it was to the Merciless Parliament of 1388, which condemned de la Pole for treason and to forfeiture. During the session of his third Parliament, that of 1390 (Nov.), he and his fellow shire knight Wingfield both stood bail for the release from the Tower of John Rokele of Essex, whose serious dispute with the abbot of St. Osyth was a matter brought to the attention of the Commons.3 In October 1396 when the former earl of Suffolk’s grandson William, the second son of his heir Sir Michael de la Pole, was baptized in Cotton church, Burgate and Wingfield were the child’s godfathers. The former gave him a gilt cup and his nurse a present of 20s. Coincidentally, on the very same day, one of Burgate’s daughters, Eleanor, was married to John Rookwood of Stanningfield, half-brother of William Rookwood* of Acton. Another of those attending the baptism was Burgate’s friend Sir William Elmham* of Westhorpe, whose wife belonged to the de la Pole circle, being sister-in-law to Sir John Wingfield† of Letheringham. Burgate stood surety for Elmham on the occasion of his election to the Parliament of 1397 (Jan.) and subsequently acted as an executor of his will and a trustee of his widow’s estates. Whether Burgate’s connexion with the de la Poles affected his actions at the time of the deposition of Richard II is now impossible to say: although Richard had restored Sir Michael de la Pole to the earldom of Suffolk in 1398, the earl strongly supported Bolingbroke’s usurpation of the throne, as did most of his following. Burgate was summoned among other East Anglian knights to attend great councils in 1401 and 1403.4

The personal matters with which Burgate was concerned in his last years included the procuring of a papal indult in 1397 so that he and his wife might be granted plenary remission by their confessor as often as they pleased, and the arrangement of the marriage of his daughter Katherine to Robert Stonham of Stonham Aspall (by whom she became mother of Robert Stonham*, who later sat for Huntingdonshire). Burgate was an executor of his son-in-law’s will, made in 1397, and he most likely helped Katherine make her second match with John Spencer*, a high-ranking official in the household of Henry of Monmouth. In 1408 he acted as a trustee of Spencer’s manors in Norfolk.5 He died on 24 July 1409 and was buried in the chancel of Burgate church, beneath a fine tomb set with a monumental brass depicting him and his wife Eleanor (who survived him by at least three years).6