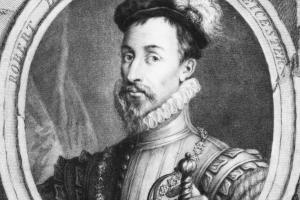 By the time of the elections for the 1559 Parliament Dudley’s connexions with the county of Norfolk were slight. It is unlikely that he lived there, certainly he did not by 1560.4 However, he was still elected senior knight of the shire in deference to his parentage, social standing and his wife’s status in the county. The journals of this Parliament contain no reference to him. By 1563 the scandal surrounding Amy Robsart’s death and his own strained relations with the Duke of Norfolk made it impossible for him to be elected there, and he did not bother, or was too proud, to come in for another constituency. The grant of a peerage in the following year removed the possibility of his again sitting in a House of Commons where he could never have felt at home.

He is, however, of some interest in the history of that institution because of the borough patronage he dispensed, patronage based not upon vast inherited estates, but upon borough lordships and high stewardships acquired through being a courtier and royal favourite. He was granted the lordship of Beverley in 1561 and the borough’s resumption of its lapsed franchise in 1563 must be attributed to him. He disposed of the lordship a few years later, but continued to have some residual influence there. The lordships of Denbigh, Denbigh castle and the contributory borough of Chirk were granted to him in 1563 as part of a huge gift which ought to have made him the most powerful magnate in north Wales. This is what he wrote when the boroughs made a return without consulting him in 1572:

If you do not upon receipt hereof presently revoke the same and appoint such one as I shall nominate, namely, Henry Dynne, be ye well assured never to look for any friendship or favour at my hands in any your affairs hereafter ... I would little have thought that you would have been so forgetful, or rather careless, of me as, before your decision, not to make me privy thereto, or at the best to have some desire of mine advice therein ... but as you have yourselves thus rashly proceeded herein without mine assent ... I signify unto you that I mean not to take it in any wise at your hands.5

peremptory dealing in ... knights of the shire, in burgesses of Parliament ... this man’s will must stand for law and reason and his letters for absolute law.

Dudley continued to nominate at Denbigh until his death, when his brother the Earl of Warwick took over.

In 1571 and 1572 when certain magnates were instructed to supervise elections in specified counties, the Earl of Leicester, as Dudley had now become, was allocated Berkshire, where he was high steward of all four parliamentary boroughs. At New Windsor, dominated by the royal household, and where he was constable of the castle, he was responsible for the return of both MPs in 1571, one in 1572, one in 1576 and, probably, one in 1584. At Abingdon and Reading he nominated one Member at each Parliament during his active period as a patron, while at Wallingford he nominated a Member in 1571 and 1572, before allowing his patronage to lapse in favour of his father-in-law Sir Francis Knollys and his friend Lord Norris.

When Leicester became high steward of Andover he was apparently under the impression that the borough was enfranchised, as, indeed, it once had been, but the franchise had lapsed. At any rate, before the 1584 election he wrote to the borough:

By 1586 the restoration of the franchise had been arranged, but Leicester’s absence in the Netherlands precluded his intervention, and in the event he never did nominate there.

Leicester’s high stewardship of Chester, together with the Denbigh grant already referred to, might be thought to have given him unrivalled power in this part of the realm, but here his interventions were surprisingly unsuccessful. He obtained one nomination in 1571 and 1572, but failed to have his secretary Arthur Atye returned for a vacancy arising in 1582, and failed again with another protégé in 1584, when, as the city records put it

My lord of Leicester’s letter well commending thereby Mr. Peter Warburton for the one citizen, which motion Mr. Mayor and Mr. Aldersey furthered to the uttermost yet was it not available, 46 voices with and 85 contrary.

Leicester managed to provide both Atye and Warburton with seats elsewhere through friends at court, but the rebuff at Chester, the only parliamentary borough in the county, is intriguing. Again, at the large freeman borough of Bristol, where they were pleased enough to have him as ‘chief governor and patron’7 there was no question of asking him to nominate MPs. So also at Gloucester, a county in itself, with a large and contentious electorate. Why Leicester should have tried to intervene here in 1584 passes understanding. So far as is known he had no links at all with the city, yet he wrote to the corporation, asking to be sent the election return ‘with a blank’ for him to ‘put in the name’ of ‘a sufficient man’. The corporation resolved unanimously that it was ‘not convenient’ to grant his request.8 After the fall of the Duke of Norfolk in 1572 Leicester became high steward at King’s Lynn and Great Yarmouth. Yet at King’s Lynn, with one doubtful exception, he nominated no MPs, and at Yarmouth only one. And at St. Albans he succeeded Sir Nicholas Bacon to the high stewardship, but not to the parliamentary patronage Bacon had wielded. Warwick gave the Earl of Warwick the nomination of one seat, occupied from 1572-89 by his and Leicester’s relative Thomas Dudley, and Coventry sometimes paid Leicester the compliment of returning his nominee, though he was never steward there. Neither was Leicester steward of Tamworth, but he sometimes nominated there by virtue of his ownership of an estate nearby, Drayton Bassett; he may have put in both Members there in 1571, one in 1572 and one in 1584. Another place subject to Leicester’s influence in this part of the country was Lichfield, where he nominated one MP in 1571, 1572 and 1584, including, in 1584, his steward Richard Browne, whom he had failed to get elected at Maldon in the following circumstances.

The patron of the borough of Maldon until his death in 1583 was the Earl of Sussex. Perhaps Browne, who was clerk of the peace in Essex, suggested a takeover to Leicester; perhaps Leicester needed no encouragement: he had been connected with the place for nearly 20 years and held the honorary office of ‘high recorder’. What happened was that before the 1584 election he wrote to the borough authorities asking for ‘the nomination of the burgesses of your town’ and followed this (30 Oct.) by specifically nominating Browne, who was ready ‘at any time to do your town what convenient pleasure may be’. In reply Maldon used some old excuses: they had already chosen their MPs before the letter arrived; the election depended on ‘the consent of a great multitude’ etc., so that, in the upshot, ‘we are not able to satisfy your lordship’s request’.9

Other random examples of Leicester’s patronage include Cirencester (another borough ‘restored’ in 1571, perhaps at Leicester’s instance); Poole in 1584; and Southampton in the same year—probably this was connected with his sweet wine monopoly. Though questionable identifications and overlapping patronage preclude certainty, it may be estimated that the number of direct Leicester nominees was: six in 1563, ten in 1571, twelve in 1572, and eleven in 1584, plus, in 1563, four nominations in the west country made indirectly through the Earl of Bedford, and three further indirect nominations in 1584: at Liverpool through the Earl of Derby, at Newcastle-under-Lyme through the duchy of Lancaster, and at Christchurch through the Earl of Huntingdon. Considering Leicester’s temperament and the fact that he was determined to gather into his hands as many borough nominations as he could, his achievement was moderate. Still, it should be remembered that only four Parliaments were involved. By 1586 he was in the Netherlands, his mind occupied with other matters than English elections, and on 4 Sept. 1588 he died, possibly poisoned, at Cornbury, Oxfordshire, a month before the next election campaign began.

Where no specific source is given the reader is referred to the relevant constituency account. Use has been made of an account of Leicester’s patronage drafted by Sir John Neale.