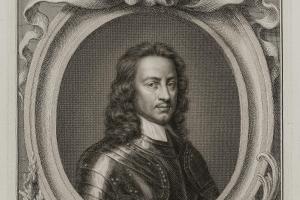 The Hampdens were a long-established landed family in Buckinghamshire, with estates centred on the western edge of the Chilterns. Their seat at Great Hampden was situated about five miles south-west of Wendover. Members of the family had been knights of the shire on ten occasions and sheriffs of the county 17 times.13 By the late sixteenth century their religious sympathies were clearly Calvinist.

The eldest son of William Hampden, Member for East Looe in 1593, and Elizabeth, daughter of Sir Henry Cromwell of Hinchingbrooke, Huntingdonshire, Hampden was probably born in the spring or summer of 1595. His father died early in April 1597, shortly after the birth of his second son, Richard, leaving Elizabeth to secure John’s wardship and settle his debts. In his will, William placed his trust in his relatives, in particular his brother, Edmund; his cousins, William Hampden of Emmington, Oxfordshire and the rising lawyer George Croke† of Chilton, Buckinghamshire; his father-in-law Sir Henry Cromwell; his wife’s aunt, Joan Warren, and her husband; and his brother-in-law Sir Jerome Horsey*.14 However, quarrels soon broke out between members of this group, as John Hampden, whose inheritance may have been worth more than £1,000 p.a., was prospectively amongst the wealthiest members of Buckinghamshire’s landed elite.15 Elizabeth Hampden was expected to pay £800 for John’s wardship, and secured it with the help of Henry Maynard†, secretary to Sir Robert Cecil†.16 One manor in Oxfordshire was conveyed to Edmund Hampden,17 perhaps to pay off William’s debts, but, apart from that, William’s legacy passed to his son intact.

Elizabeth Hampden appears to have had musical tastes,18 as well as skills in estate management.19 She sent both her sons to Thame grammar school, where the curriculum reflected conventional priorities for classical languages and divinity. John was admitted to Magdalen College, Oxford in March 1610. Whilst there, he contributed Latin verses to tributes by university men in 1612 on the death of Prince Henry,20 and again in 1613 upon Princess Elizabeth’s marriage to the Elector Palatine.21 In November 1613 he entered the Inner Temple, although it is unclear how seriously he undertook his legal studies. However, Sir Philip Warwick later testified to Hampden’s ‘great knowledge both in scholarship and the law’.22

Hampden married Elizabeth, daughter of Edmund Symeon of Pyrton, in Oxfordshire, in June 1619. The Symeons were prosperous yeomen who had crossed the social boundary into the gentry in the late sixteenth century.23 Between October 1622 and July 1633 Hampden and his wife had three sons and six daughters. During this period Hampden began his public service to Buckinghamshire as a commissioner of sewers and subsidies and as a justice of the peace. His performance of his duties in these roles was conventional and unremarkable. He was less fortunate in agreeing to act as executor of the will of his maternal kinsman Edmund Dunch† in 1623, which led to prolonged litigation with one of Dunch’s daughters and her husband.24

Hampden may have disappointed his mother in not seeking to buy a peerage in 1620.25 He perhaps owed his return for Grampound in December 1620 to John Arundell* of Trerice, to whom he was distantly related through his wife’s family. Apart from being nominated to attend a conference with the Lords on the informers bill early in December 1621,26 Hampden left no trace in the records of the 1621 Parliament. However, during this assembly Hampden may have become involved in an unsuccessful attempt to restore Wendover as a parliamentary borough. A second attempt to re-enfranchise Wendover was mounted in 1624,27 and was apparently paid for by Hampden, although he himself did not sit in this Parliament.28 This fresh attempt bore fruit, and the grateful electors of Wendover rewarded their sponsor by returning him to Parliament in 1625, 1626 and 1628. Hampden is not known to have made any speeches in the first two of these parliaments, but in 1626 he was named to a committee concerned with a bill on the contentious subject of muster-masters.29

The financial problems facing the Crown forced Charles I’s regime to turn to benevolences and Privy Seal loans to fund its wars. Hampden paid £10 of the Privy Seal loan of £13 6s. 8d. required from him in 1626.30 But he, like his uncle, Sir Edmund Hampden, refused to pay the Forced Loan demanded of him at Aylesbury on 26 Jan. 1627.31 He was summoned before the Privy Council three days later and imprisoned in the Gatehouse on 31 January.32 It was almost certainly there that his friendship with (Sir) John Eliot*, who also refused to pay the Loan, was formed. Hampden, his uncle and other Loan refusers petitioned unsuccessfully for their release on 27 Feb. 1627.33 In July he was placed in the custody of the sheriff of Hampshire, and he was not finally released until 2 Jan. 1628.34

This experience appears to have radicalized Hampden. He certainly seems to have been much more active in the Commons in 1628-9 than in previous parliaments. In the first session, he was appointed to committees on bills prohibiting recusants sending their children to be educated abroad (21 Mar. 1628), dealing with the peace of the church and commonwealth (7 Apr.), and against scandalous ministers (19 April).35 He was also involved in drawing up charges against Manwaring and Montagu, who had defended Arminian doctrines and the allegedly arbitrary exercise of regal powers.36 Secular grievances over billeting of soldiers in Surrey, the detention of the goods of Levant Company merchants and shipping losses in the wars similarly demanded his attention in committee.37 A comparable level of activity can be seen in January and February 1629, when he was appointed to committees on bills dealing with liberty of preaching (23 Jan.), recusancy (28 Jan.), the printing of the Thirty-Nine Articles (5 Feb.) and the prevention of corruption in appointments to livings (23 February).38 He was also added (30 Jan.) to the committee established to check that the Petition of Right had been enrolled in the Parliament rolls and entered in the records of the law courts. On 10 Feb. he was appointed to help examine the case of John Rolle who, although a Member, had had his goods seized for non-payment of Tunnage and Poundage and had received a subpoena from Star Chamber. Four days later Hampden was named to a further committee, this time with instructions to examine the Exchequer Court’s proceedings in the case of those merchants like Rolle whose goods had been seized for non-payment of Tunnage and Poundage.39

Hampden himself regarded threats of innovation in religion and of alteration in government as linked. On 5 June 1628, after the king’s first, unsatisfactory answer to the Petition of Right, he argued that Charles should be informed of the House’s fears in both areas and its belief that the duke of Buckingham was the friend and relative of papists and the source of their apprehensions.40 He clearly subscribed to the conspiracy theory about threats to their liberties and religion accepted by many Englishmen. Nine days later, he was, however, keen not to name Sir Ranulph Crewe*, who had lost his judicial post for refusing to subscribe to the legality of the Forced Loan, in the Remonstrance the Commons was preparing to send to the king.41 It is noticeable that these remarks were made at the end of the session, when Sir John Eliot’s influence on the House was at its height.42 His only recorded speech in the next session was on 20 Feb. 1629, when he argued that the customs farmers, including Sir John Wolstenholme*, be called in and dealt with for seizing a Member’s goods for non-payment of Tunnage and Poundage.43 He was evidently in accord with Eliot’s strategy aimed at attacking the instruments of royal policy and of attacking the inner circle of the king’s advisers. Eliot’s excoriation of these policies in Church and State on 2 Mar. led to his arrest and imprisonment, punishments that Hampden himself avoided.

By the end of this Parliament, Hampden was a more prominent figure than he had been a year earlier. He had articulated concerns over royal policies shared by many much better known members and had almost certainly become more closely associated with them. Hampden was to prove a firm friend to Eliot in the years before the latter’s death in the Tower,44 and became a trusted associate of William Fiennes, 1st Viscount Saye and Sele.45 He developed more distant but nonetheless important connections with the 2nd earl of Warwick (Sir Robert Rich*). His great fame as the protagonist in the Ship Money case of 1637-8, and as one of the leading members of the ‘Junto’ in the Long Parliament, lay ahead.

Hampden was undoubtedly a man of considerable wealth. He was able to pay a portion of £2,500 for his daughter Elizabeth’s marriage to Richard Knightley†, son of one of his oldest friends, and a further £1,000 with an extra £1,000 to come for his daughter’s Anne’s marriage to the younger Sir Robert Pye†. His will envisaged that his executors, (Sir) Gilbert Gerard* and his mother, should raise £14,000 from his estate to settle his debts, to raise portions for his remaining daughters and to pay small annuities to his younger children.46 One contemporary, Richard Grenville, estimated that his annual income in the early 1640s was about £2,500 p.a.47

Hampden was wounded during a skirmish with royalist forces at Chalgrove Field on 18 June 1643, and died at Thame on 24 June. He was buried in Great Hampden on 25 June 1643.48 Both his second son, Richard, and his third son William, subsequently sat in Parliament.