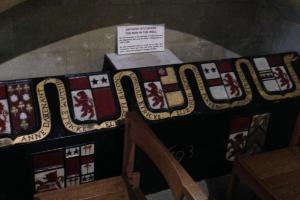 The Ettricks appear in the Wimborne area of Dorset in Elizabethan times; and the President of Trinity’s malicious remark that Ettrick would conjure up a jackanapes to be his great-grandfather reflected simultaneously on the brevity of his stature and his lineage, as well as his eccentricity. Ettrick’s father entered his pedigree in the Visitation of 1623, and before the Civil War had become steward to Sir John Bankes†, lord of the manor of Corfe Castle. He was repeatedly accused of delinquency, but escaped on payment of £24 to the county committee, his estate being valued at £200 p.a. Ettrick himself married the daughter of a wealthy clergyman. Their marriage settlement was set aside by private Act of Parliament in 1662, nominally to enable him to pay his debts, but actually to facilitate his purchase of Holt Lodge. As a practising barrister, he seems to have lived principally in London, where he registered his pedigree in 1666, though he continued to act as steward to the Bankes family.3

Ettrick first stood in 1677 for Corfe Castle. Although duly elected he immediately ‘surrendered’ the seat to Lord Latimer (Edward Osborne), who was returned accordingly. A few years later, Ettrick appears as agent for Latimer’s brother Lord Dunblane (Peregrine Osborne) on his Dorset estates; but as Dunblane obtained these estates as late as 1682, the origins of Ettrick’s connexion with the Osborne family must be sought elsewhere, and may perhaps be found in his brother’s post as collector of customs at Sunderland. Sir Leoline Jenkins referred to him as a good friend when despatching him to Dorset to take charge of investigations after the Rye House Plot. He was generously rewarded, not merely with the venison he asked for but with a third of Kingswood chase.4

Ettrick played the chief part in the campaign against Samuel Hardy, the nonconformist minister of Poole. When the surrender of the charter ensured the return of two Tories in 1685 he allowed his son, Ettrick William, to stand for Poole, while he himself was returned on the Hyde interest at Christchurch, where the Whig agent, Henry Trenchard, had designs upon his recordership of Poole. No activity in James II’s Parliament can positively be attributed to him, and he may not have attended, for he was in Dorset to sign the order for Monmouth’s committal on 8 July.5

Ettrick and his son were among the ten Templars reported to have given their concurrence to James II’s religious policy in 1687. He is not known to have stood again, and was removed from the commission of the peace for refusing the Association in 1696. He occupied his leisure by contributions to local history and by preparing (in unwarranted confidence of an early demise) a tomb which has become the principal tourist attraction of Wimborne Minster, where (more or less) he was ‘buried’ on 5 Oct. 1703.6