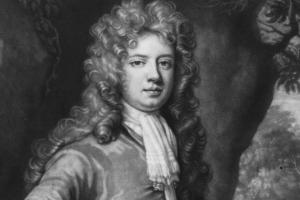 The younger son of a younger brother, Montagu was fortunate, after spending four years at Cambridge, to have his cousin John appointed master of his college, and to obtain a royal letter for his own election as fellow, ‘notwithstanding any statutes or customs to the contrary’. As a friend of Isaac Newton, and attracted neither by ordination nor matrimony, it might have been expected that he would remain a don. But his poetic talent attracted the patronage of the 6th Earl of Dorset (Charles Sackville), who introduced him to London society, and a few months before the Revolution he married the dowager Countess of Manchester, a sexagenarian with a jointure of £1,500 p.a. In December he took up arms for the Protestant cause, serving under his step-son, the 4th Earl. Dorset, who had inherited the Copt Hall estate in Essex, recommended him to the lord lieutenant, the Earl of Oxford, who in turn wrote on his behalf to the Maldon corporation, and he defeated the Tory veteran (Sir) John Bramston at the general election.1

Montagu was probably moderately active in the Convention, with about 30 committees, and he made five recorded speeches. On 25 Feb. 1689, he acted as teller against referring grievances to a special committee, and he helped to draw up the address for a war with France on 16 Apr. His maiden speech, so far as is known, was delivered towards the end of the month, when he assured the House that in his opinion its honour was not concerned in the publication of decisions by its committees. He was appointed to the committee for the toleration bill, and added to that for the address on behalf of Irish Protestants. On 1 June, he was named to the committee inquiring into the delay in the relief of Londonderry. He had bought from the new Government one of the clerkships of the Privy Council for £1,500, and he was one of five Members appointed to inspect the registers for entries concerning the Seven Bishops. On the supply bill he helped to word a clause to reduce Exchequer fees and a proviso penalizing non-jurors. He was appointed to the committee for the attainder bill and on 1 July added to that for the bill of rights. Two days later he helped to draw up the address on Irish affairs. On 22 July he was sent to the Lords to desire a conference on Titus Oates. In the second session of the Convention he was appointed to the revenue committee. In the debate on restoring corporations he acted as teller against restricting the operation of the disabling clause to mayors and recorders, but he is not listed as a supporter of the clause.2

Thanks to his flair for finance and parliamentary tactics, Montagu’s rise was rapid, and he became one of the lords of the Whig Junto. Out of office for most of Anne’s reign, he was appointed first lord of the Treasury on the Hanoverian succession, but died of inflammation of the lungs on 19 May 1715. His nephew, the son of Edward Montagu II, succeeded to the barony under a special remainder.3