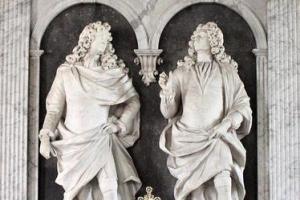 Parker’s father, who was something of an antiquary as well as a successful merchant, traced his descent from the Devonshire family. After the Restoration he built up an estate in the Upper Stour valley, purchasing the Worcestershire manor of Talton in 1663 and the adjacent property of Honington some years later. Parker himself became a lawyer, and was returned for Evesham, of which borough he was recorder, at both elections in 1679. His marriage had brought him into the Hyde family, and he was marked ‘base’ on Shaftesbury’s list. He was appointed to the committee of elections and privileges, and to that to consider the reform of bankruptcy proceedings on 16 May 1679, but he was absent from the division on the first exclusion bill. He left no trace on the records of the second Exclusion Parliament, and lost his seat to an exclusionist in 1681. He took part in the surrender of the Evesham charter in 1682, and was reappointed recorder. He regained his seat in 1685 and became an active Member of James II’s Parliament, being named to 15 committees, mostly on legal matters, such as expiring laws, the recovery of small tithes and the relief of poor debtors. He was absent from the meeting of Worcestershire justices to answer the questions on the repeal of the Test Act and Penal Laws, and in October 1688 he signed the letter of the Warwickshire deputy lieutenants reporting that they were unable to act because their commissions had lapsed with the removal of the Earl of Northampton.3

Parker was re-elected to the Convention. His record cannot be entirely distinguished from that of Anthony Parker, but he was probably moderately active. He voted to agree with the Lords that the throne was not vacant, and may have helped to estimate the cost of defence in time of peace and to draft the coronation oath. As heir to his uncle, a London merchant, he was probably the ‘Mr Parker’ appointed to the committee to inquire into complaints against customs officials. He probably helped to draw up the address of thanks for the King’s declaration in favour of the Church, and he was again concerned with tithes and bankruptcy legislation. He may have been added to the committee for the attainder of rebels in Ireland, and appointed to that for administering a general oath of allegiance. Altogether ‘Mr Parker’ was named to as many as 30 committees, and acted as teller in two divisions, but he is not recorded as speaking. He remained a staunch Tory under William III and Anne, refusing the Association in 1696. He died on 25 Oct. 1713 and was buried at Honington. His eldest son, who predeceased him, sat for Evesham from 1701 to 1708, after which the next member of the family to sit was the 8th baronet, who was returned for West Suffolk in 1832.4