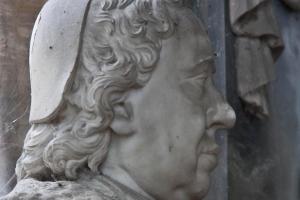 Alexander Denton came of an old Buckinghamshire family, who had been seated since 1547 at Hillesden, 3 miles from Buckingham, owning also the Prebend End manor in that borough.3 Between 1689 and 1708 his father represented Buckingham in three Parliaments and his brother, Sir Edmund, in five, the latter being also returned for the county in 1708 and 1710. Denton first came to the fore as counsel in the Aylesbury case of 1705, succeeding his brother at Buckingham in 1708. A protege of Lord Wharton’s, he was again returned there as a Whig on his own interest in 1715, voting for the septennial bill in 1716, absent on the repeal of the Occasional Conformity and Schism Acts, and voting against the peerage bill in 1719. His only known speech was in favour of postponing the impeachment of the Duke of Ormonde in June 1715.4

Soon after re-election in 1722 Denton vacated his seat on appointment to a judgeship. He applied unsuccessfully to Walpole in January 1736 to be made lord chief justice of the common pleas and again in February 1737 to be made lord chief justice of the King’s bench (see under Willes, John) but Walpole told him that he was ‘too old and infirm to discharge the duty’. Offered the post of chief baron of the Exchequer in 1738, he at first refused; but ‘when I shewed a willingness to submit ... the objection was made and no time given me to do what [was] required’. ‘My greatest desire is to know why I was so very much pressed to take it and why I was so easily dropped.’5 He died 22 Mar. 1740, leaving his estate to his nephew George Chamberlayne.