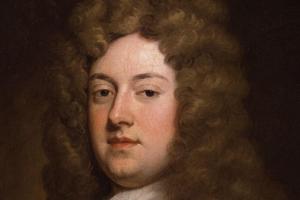 Dunch was descended from William Dunch, auditor of the mint to Henry VIII and Edward VI, who bought the manor of Little Wittenham in 15523 and was M.P. for Wallingford, as were several of his descendants. His grandfather, Sir Edmund Dunch, M.P., whose wife inherited Down Ampney (with above £60,000), was heir to a moiety of the ancient barony of Burnell and was created by Cromwell (his 1st cousin) 26 Apr. 1658, under patent, Baron Burnell of East Wittenham, Berks., a creation which was not recognized at the Restoration. A Whig, a member of the Kit Cat Club, related to Lord Wharton, and married to the daughter of Marlborough’s sister, Arabella, Dunch obtained a place at court from the Whigs under Anne, which he lost under the Tories but recovered on the accession of George I. Thenceforth he voted with the Government till his death 31 May 1719. According to Hearne4 ‘he was a very great gamester ... By gaming, most of the estate is gone. He was drawn into gaming purely to please his lady’. Newcastle, in recommending him to the electors of Boroughbridge in 1713, describes him as ‘a particular friend of mine’ with an ‘estate of at least £4,000 a year, ... a true Whig, and a very honest, civil, well-bred, and good-natured gentleman’.5