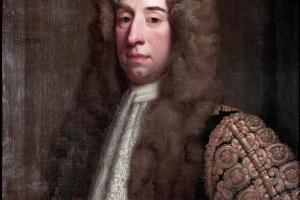 laid the foundations of that interest both in the county and in the town of Guildford that our family have ever since kept up to a height that has been scarcely equalled in any county by one family, having been chosen for the county to all Parliaments, except five, from 1627; and for Guildford to every Parliament since 1660, except for two years upon a vacancy for a friend by our family interest, and sometimes for Haslemere, Gatton and Bletchingley, in the same county, once two of our family together for the county, and several times two of them for Guildford.1

The second of the three Speakers produced by the family, he played a prominent part under Anne, particularly in connexion with the Act of Succession, which he conducted through the Commons. Appointed chancellor of the Exchequer at George I’s accession, but soon displaced by Walpole, he wrote to the King representing that after his ‘unwearied and successful endeavours’ to promote ‘those laws which have so happily settled the Crown of Great Britain on your Majesty’, it was hard ‘to be with contempt dismissed your service, without the least cause of misdemeanour assigned’.2 He was compensated with a tellership of the Exchequer for life and a peerage, but having been a member of the House of Commons committee whose report had led to the impeachment of the heads of the late Tory Government, he was reluctant to take out his patent until the impeachments were out of the way, so that ‘they who had been accusers might not sit as judges in the same cause’. After some months, owing to the delay in trying Lord Oxford, he compromised by taking out his patent and abstaining from voting on anything relating to the impeachments.3 He died 5 Dec. 1717.