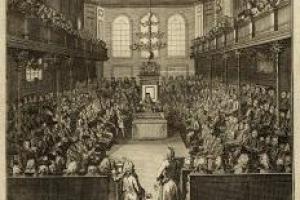 The 1741 election practically annihilated what remained of Sir Robert Walpole’s majority in the Commons. On 2 February 1742 he resigned from the government, thereby ending his unbroken 20-year tenure as ‘prime minister’. The establishment of a stable new ministry in the midst of Britain’s involvement in a European war, proved a long and torturous process. The ‘old corps’ Whigs, who had served and supported Walpole, remained numerically superior in the ministry and in Parliament. But up to 1746 they were forced to endure a tough struggle for survival on account of the king’s favouritism towards Lord Carteret, the former patriot leader in the Lords.

At the general election in May 1741 there were contests in only 94 constituencies, the lowest number since 1713. A total of 417 Whigs and 136 Tories were returned (with five seats unfilled owing to double returns). Of the Whigs, the ministry calculated a maximum strength of 286, while the total number of opposition Whigs was 131. Together with the Tories, the combined opposition therefore numbered 267. This gave the government an overall possible majority of only 19 compared to 42 at the end of the last Parliament. By the time the Commons met on 1 December, death and other factors had further lowered the government’s majority, to just 16.

The ministry did badly in Cornwall and Scotland where ministerial influence had previously been strong. Furthermore, at the opening of the new Parliament it was clear that opposition Whigs and Tories, greatly encouraged by their increased numbers, were now jointly enthused with the imminent prospect of toppling Walpole from power. Early divisions in a very full House of Commons in December 1741 confirmed the ministry’s precarious situation. On 16 Dec. they lost the chairmanship of the committee of elections to an opposition Whig by 242 votes to 238. This ensured that priority would now be given to hearing election cases favoured by the opposition (rather than the ministry), and so enable them to reduce the ministerial majority still further. Further narrow defeats culminated on 28 January 1742 with a defeat on the Chippenham election. Walpole accepted that he had lost his ability to command the Commons and took the decision to resign. He made a final appearance in the Commons on 2 February.

The ministry was reconstructed in a way that preserved the dominance of the ‘old corps’ Whigs who had served under Walpole, but with an unwelcome infusion of some 32 ‘New Whigs’. These were the prince of Wales’s faction and the supporters of William Pulteney and Carteret. Pulteney himself refused office and took a peerage (as earl of Bath), but other leading Whig opponents accepted high office, notably Carteret who became secretary of state. It proved, however, a highly unsatisfactory arrangement as the ministry took on a divided appearance in Parliament.

The ‘New Whigs’, former opponents but now members of the ministry, found themselves mercilessly baited in the Commons for refusing to countenance the popular measures for which they had previously campaigned. These included bills aimed to ban ‘placemen’ and ‘pensioners’ from the Commons and the prosecution of Walpole. In addition, as Britain became drawn more deeply into conflict in Europe over the Austrian succession, Carteret adhered to an expensive and largely unsuccessful war policy designed, it seemed, purely to protect the king’s electorate of Hanover. This caused immense friction between Carteret and his old corps colleagues who during 1742-44 had to bear the brunt of furious attack on the issue in the Commons, which William Pitt (the elder) was prominent in leading.

In November 1744 Henry Pelham, the old corps leader in the Commons, and his ministerial colleagues forced the king to dismiss Carteret (now Earl Granville) from office. Most of the ‘New Whigs’ were also turned out and replaced, initially by a small number of Tories and opposition Whigs (known as ‘New Allies’). However, this experiment in forming a ‘Broad-Bottom Administration’ to expand the ministry’s bases of support in the Commons was only partially successful; its Tory members soon lost interest and returned to opposition.

The king’s continued confidence in Granville caused ongoing annoyance among the ministers. The outbreak of the ’45 Rebellion in Scotland deterred them from action, however, until February 1746 when they resigned en masse. Royal efforts to form a new administration led by Granville and Bath failed dismally, and the Pelhams returned to office, marking a victory for the ‘old corps’. The remainder of Granville’s supporters were dismissed, and the king was forced to agree to the inclusion of William Pitt among the new ministerial appointments.

The extent of the ministry’s newly achieved majority in the Commons was apparent on 11 April 1746 when the Commons agreed to continue funding the Hanoverian army by 255 votes to 122. Before long, however, the 30-odd ‘New Allies’, led by the Prince, began to seek an accommodation with the Tories, thus opening a new phase of the ‘Leicester House Opposition’. It was chiefly to frustrate the prince’s preparations for the election due in 1748 that George II dissolved Parliament in June 1747.