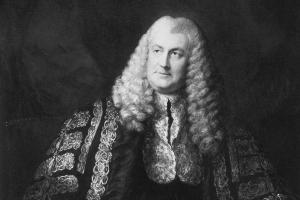 Cornwall was first associated in politics with Charles Jenkinson, and their connexion was strengthened by his marriage to Jenkinson’s sister. Although he had ‘a very comfortable patrimonial fortune’2 Jenkinson wished to obtain an office for him, but Cornwall raised objections: ‘A seat in Parliament is my first object’, he wrote,3 ‘without that I would not choose to engage in any department of public business.’ However, his objections were overcome, and as commissioner for inquiring into the German accounts he did good work and gained a useful knowledge of Treasury procedure.

He remained on friendly terms with Jenkinson, but after 1765 began to drift away from him politically. By 1767 he was close to Rockingham, negotiating at Barnstaple a seat for a relative of Rockingham’s. He had also become connected with Shelburne, who recommended him to Edward Eliot for a seat at Grampound, and who apparently paid at least part of his election expenses. On 19 Mar. 1768 Eliot wrote to inform Shelburne that Cornwall and Grey Cooper ‘were chose unanimously’:4

To bring matters to this degree of certainty has brought on a large expense. I must necessarily write to Mr. Cooper on this head who will of course communicate my letter to Mr. Cornwall: I cannot therefore prevent Mr. Cornwall being informed of the amount of the expense, nor ought I perhaps if I could. He shall be made acquainted with your Lordship’s kindness towards him.

Cornwall soon became known as one of the most prominent speakers on the Opposition side. In Cavendish’s reports 200 interventions of his in debate are noted for the years 1768-74, touching almost every political topic. While inclined to follow Shelburne and Chatham his friendship with Dowdeswell kept him also connected with Rockingham; and in the squabbles of the two parties he managed to keep on good terms with both and to act as a reconciling influence. But Dowdeswell wrote about him to Rockingham, 20 Dec. 1772, in connexion with East India affairs:5

He made East India affairs his special concern. In 1769 he planned with Rockingham a coalition between Clive, Colebrooke, and Sulivan against ministerial influence at India House,6 and in 1772 was invited by Clive and Colebrooke to go to India as one of the Company’s supervisors.7 But next he turned against Clive, was a member of Burgoyne’s select committee and urged privately to North, and in the House that its reports should be acted upon. North offered him a place on the council to be set up in Bengal by the Regulating Act, but Cornwall refused. He told North:8

Though I very much approved the present plan, that circumstanced as I was I had rather take my chance at home, and that if I went entirely out of public life in consequence of what had been engaged for by his Lordship a few months ago I should be perfectly contented and easy.

What had North ‘engaged for ... a few months ago’? Was it the pension of £500 p.a. which in July 1773 was granted to Cornwall out of the revenues of the West Indian islands? On 18 July Dowdeswell wrote to Rockingham:9

I am much concerned at the loss of Cornwall if it prove true. It is a public loss. I think he will find himself no gainer, and I am sure I feel it a particular loss to myself ... If the consideration is what your Lordship thinks it, his meritorious services in the liquidation of the German demands, it is a less defensible grant than Dyson’s or Bradshaw’s. For he has been rewarded for those services ... But I really mistrust your information, for if Cornwall goes to the court he is too wise to take his reward in this manner.

When on 18 May 1774 the Opposition raised the matter in the House, Cornwall said: There was nothing but justice in my appointment’; and in reply to a question why the pension was not given when the German demands were liquidated: ‘I am but a bad solicitor and believe it was my own fault. It came at last without any application, and [if] I thought I had not merited it I would not have taken it.’10

When in 1774 Cornwall was offered a place at the Treasury Board, Shelburne wrote to Chatham:11

Lord North ... very frankly told Mr. Cornwall that he should not know how to turn himself if he refused it, and expressed himself in regard to Mr. Cornwall’s principles and future conduct ... in a very open liberal manner. Mr. Cornwall, however, remains truly undetermined. He has, I believe, mentioned it only to Mr. Dunning, Colonel Barré, myself, and his brother-in-law, Mr. Jenkinson, who was totally ignorant of it; but I should imagine it will end in his acceptance; from the distracted, unexplained state of Opposition, as well as the several motives I had the honour of discussing with your Lordship in the summer.

He frequently defended North’s American policy, but seems to have had doubts about the conduct of the war; and was much shaken by the news of Burgoyne’s capitulation. On 29 Dec. 1777 he wrote about North to Jenkinson:13 ‘I am so much out of humour with his conduct, and see so little chance of things turning out tolerably well, that I endeavour to think as little as I can on the subject of America.’ Jenkinson and Cornwall were consulted by North when he framed his conciliatory plan, and Cornwall was strongly for it. ‘The fairest and clearest exposition of the conciliatory proposition’, he wrote to Jenkinson on 4 Jan. 1778,14 ‘seems to me to be the only measure which can ever be productive of a proper reunion between the two countries.’

Henceforth his interventions in debate were confined to Treasury business, and his sphere more like that of a higher civil servant than of a politician. And when in October 1780 Frederick Montagu refused North’s offer of the Chair, Cornwall accepted it without demur. He was, wrote the King,15 ‘a very respectable person for the office of Speaker’. Walpole too spoke well of him:16 ‘Cornwall was a comely sensible man, decent in his manner and matter, but of no great vivacity’; and according to Wraxall17 he ‘possessed every physical quality requisite to ornament the place’. His early promise had never matured, and as Speaker he was undistinguished.  He died 2 Jan. 1789.

His name is often spelt Cornewall—he was a first cousin once removed of Velters Cornewall—but he himself spelt it as above.