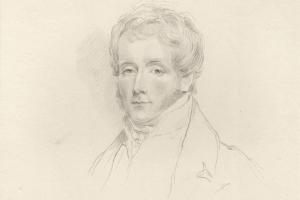 Grant spent his first 12 years in India: ‘too long’, in the view of Macaulay, who subscribed to the widespread belief that his characteristic ‘languour and slowness’ were attributable to his early exposure to the Bengal climate. After a distinguished career at Cambridge, Grant, who joined the Speculative Society and was an early contributor to the Quarterly Review, read for the bar, but ill health forced him to go abroad and he never practised. On encountering him at St. Helena in 1805 Lord Wellesley described him as ‘a young man of most accomplished manner and address’, who ‘appears to possess an excellent disposition, considerable talents and extensive information’. Elizabeth Grant of Rothiemurchus, subsequently a close friend, recalled his early days in Highland society after his father, the powerful East India director and member of the Clapham Sect, had bought an estate on Skye:

In 1810, Mrs Grant of Laggan, the author, expressed her admiration for Grant and his siblings,

in whom one sees a soft reflection of the virtues of their parents, heightened by the graces of youth, the polish of education, and the embellishments that a peculiar relish for literature, for music, and for all that is pleasing and elegant in science, adds to a degree of native genius.2

I would indulge only a cautious joy, seeing from the very case that has opened a way for my son, how uncertain human possessions are; and indeed I am anxious also about the appearance my son may make in Parliament. I do not doubt his principles, nor ... his having a good competency of talent, and I neither expect nor desire he should come forward with any splendid exhibition at first, because when this can be done, it is not once in an age that such high ground taken at the outset can uniformly be maintained; but my anxiety is that he may be induced to show himself in a more sober way, and to take such an active part as he could with application sustain.3

Although Grant’s basic political sympathies lay with government, he soon showed that, like his father, he was prepared to take his own line on issues on which he held strong convictions. He voted for Morpeth’s motion on the state of Ireland, 4 Feb. 1812, to the pleasurable surprise of Francis Horner, who had thought him too much ‘tinctured with the contagion of the Methodists’ to be favourable to Catholic relief. The vote created a stir in Inverness, where it was alleged that he had ‘joined the opposition’, and he felt obliged to explain his conduct to the provost, 3 Mar. He admitted that he had supported the motion because it recommended a measure of Catholic relief, but denied that by so doing he had committed himself to ‘emancipation without guards’:

To regard it as a proof of systematic hostility to government, would have been most unfair, even if it had been a dead opposition vote; for a Member, who is usually with ministers, cannot be condemned as having deserted them, if, even in a decided party matter, he should for once oppose them; and those who have taken the trouble to animadvert on my parliamentary conduct, ought, in fairness, to have given themselves the farther inconvenience of examining it throughout ... But the truth is, that the Irish debate was not considered as a test of general political opinion.

Grant, who similarly defended the East India Company’s monopoly in the face of the declared hostility of the Inverness council, probably voted for Grattan’s motion on Catholic claims, 24 Apr. 1812, though it may have been his father who did so. He later argued that the success of Canning’s motion, 22 June, substantiated his claim that support for emancipation was growing and vindicated his earlier vote. He considered the death of ‘that great man’ Perceval an ‘irreparable’ loss, but it is not clear whether it was he or his father who voted against a remodelling of administration, 21 May.4 In his maiden speech, 13 July, he supported the peace preservation bill as a necessary counter to ‘a regular and organized system of insurrection’. His father thought the performance had been well received and a month later wrote that

the opinion since diffused of that essay has gone so far beyond all I had allowed myself to imagine, that I am really ... alarmed, for expectation has been raised to a degree which can hardly fail of proving injurious to him.5

At the time of the dissolution of 1812 Grant was travelling in Ireland. Although first-hand observation did not weaken his inclination towards conciliation of the Catholics, he noted that ‘the Protestants in many parts really live on a mine; in daily intercourse and habits of society with those who at the first opportunity would cut their throats’. In his election speech he admitted the existence of distress, but diagnosed the prevailing ‘democratical spirit’ as the gravest threat to the constitution. His father sent a favourable, but typically guarded, report to Mrs Grant:

He delivered it easily and fluently ... This satisfies me more of his ability as a speaker but still the degree of success in the House of Commons to which he may attain is another question; and, even if he should attain a rank there, what the beneficial consequences may be to his views in life is yet another question quite different.6

His lengthy speech for the Catholic relief bill, 13 May 1813, was said by Mackintosh to have been ‘very brilliant’, but Wilberforce had reservations: ‘beautiful, but too elaborately’ done. Grant, who voted for the promotion of Christian missionary activity in India, 22 June, 1 and 12 July, defended the East India Company’s monopoly, 31 May and 28 June 1813, and on 14 July supported Wilberforce’s motion for information on Portugal’s fulfilment of the treaty concerning abolition of the slave trade, calling at the same time for Christian measures of atonement for past wrongs in Africa. He seconded the address, 4 Nov. 1813, with a speech which caused Horner to record a severe verdict on his oratory:

Considerable command of language, undoubtedly, he shows: but there is a very thin substance of thoughts in his declamation; and what is a more capital defect, his declamation last night seemed to me, with all his rhetorical talk of sentiment, really defective in point of feeling, public feeling (I mean) for the great interests he was set up to declaim upon.

In November 1813 the elder Grant told Bught that ministers were keen to recruit his son’s services and the following month he was appointed to the Treasury board. Grant had to seek re-election twice, having been disqualified in the first instance for resuming his seat without taking the oaths. In July 1814 he showed an interest in standing for Cambridge University in the event of a vacancy. He apparently did not speak again until 8 Nov. 1814, when he argued that the war with America had been unprovoked by Britain. Lord Liverpool later wrote that Grant at the Treasury ‘has had devolved upon him by Mr Vansittart and myself a considerable part of the business of the board’ and that he was ‘well acquainted with the finances of the country’. On 6 June 1818 Edward John Littleton recorded a private conversation with Grant, who was sharply critical of Vansittart as chancellor, and was of the opinion that further reductions in the establishments were essential if the finances were to be retrieved.8 He had no obvious specific brief in the House, but proved himself a useful government spokesman on a wide range of issues. His speech on the address, 28 Jan. 1817, when he contended that there was a ‘most mischievous’ spirit of sedition at large, was appropriately interrupted by news of the attack on the Regent. On 1 July he submitted a series of financial resolutions as a counter to those brought forward earlier by Tierney, and on 9 July he argued their merits and secured their adoption.

Shortly before the general election of 1818 Grant, who succeeded his father as county member, having had to cede the burgh seat to Cumming Gordon’s uncle, was offered and accepted the Irish secretaryship in succession to Peel, after Goulburn and Huskisson had turned it down. It was impressed upon him that his Catholic sympathies, which he had expressed in silent votes on 30 May 1815, 21 May 1816 and 9 May 1817, must not be allowed to disturb prevailing Dublin policy. He soon discovered that interested parties were ready to exploit his recorded views, but assured Liverpool that he would avoid stirring the question, though he expressed a hope that he might be civil to Catholics of ‘distinction and respectable character’. Liverpool concurred in his sentiments in general, but felt it necessary to remind him that ‘it is of some importance not to lose the confidence of the Protestants’. Grant showed a concern to cut civil and military expenditure and to reform the educational system in Ireland, and he continued to deplore the prevalence of religious bigotry and to argue that it was ‘a legitimate object’ of government, ‘without any improper compromise’, to try to allay mutual hostility and suspicion.9

Grant’s few reported speeches in the 1819 session were on Irish business. He returned to Westminster for the emergency session late in the year, but repeatedly failed to catch the Speaker’s eye and had to be content with a defence of the seditious meetings bill, 8 Dec. Convinced that lack of employment was a root cause of Irish unrest, he submitted to Liverpool in December 1819 an elaborate scheme for the application of £100,000 from unclaimed Exchequer bills towards improvements on the Highland model. Vansittart sourly observed that Grant seemed ignorant of the Irish appetite for jobbery, which had already consumed large sums of public money allocated for similar purposes.10

Lord Teignmouth, who spent the winter of 1818 in Dublin with him, rated his personal success highly:

Mr Grant’s conciliatory but retiring manners disarmed the hostility which his political views might otherwise have provoked. None were better qualified than the Irish to appreciate his amiable disposition, his refined taste ... and his oratorical power ... Addresses poured in upon him from all quarters ... The secretary’s answers ... taxed to the utmost his ingenuity no less than his sensitiveness, too keen, perhaps, for this rough work of public life ... Loud was the admiration of his official penmanship.11

Politically and administratively, however, he was hardly equal to the demands of the office, although his ideas anticipated a number of later reforms.

Grant, who eventually gravitated to the Whigs via Canning, subsequently attained cabinet rank, but he never lived up to the early expectations which had been held of him. Teignmouth saw his basic flaw as a lack of ‘decision and despatch. Sensitiveness, fastidiousness, over-scrupulousness, and shrinking from the turmoil of public life, contributed to aggravate it.’12 Grant died 23 Apr. 1866.