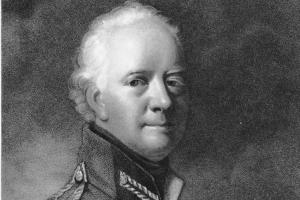 According to a memoir published five years after his death, Mackenzie entered the Edinburgh banking house of Sir William Forbes & Co. on completing his education.1 In 1778 he accepted Lord Macleod’s offer of a commission in the 73rd Highlanders and served throughout the defence of Gibraltar. He returned home at the end of the war, gave up his commission and married the sister of Francis Humberston Mackenzie* (later Lord Seaforth), who in 1793 appointed him major in the 78th Highlanders. The following year Mackenzie went with the regiment to Flanders, where he fought with distinction in the retreat. In 1796, having taken command of the regiment, he went to the Cape and thence to India, where he served for three years.

In 1794, Seaforth told the Duke of Portland that he planned to put Mackenzie up for Tain Burghs (where he had been active on Seaforth’s behalf in the disputes of the 1780s) at the next election, but he did not do so. At the general election of 1802 he was returned for Cromarty, the seat having been placed at Seaforth’s disposal by Henry Dundas to prevent any attack on his relative Sir Charles Ross in Ross-shire.2 Immediately after the election Charles Innes considered him ‘independent of Mr Dundas’, but a list of the same date in the Melville papers numbered him among ‘partisans to the politics of Mr Pitt and Mr Dundas’. In April 1804 Pitt told Melville that steps had been taken to bring Mackenzie up for the attack on Addington,3 and he voted against government in the divisions of 23 and 25 Apr. He was classed as a supporter of Pitt’s second ministry in the government list of September 1804, voted against the censure of Melville, 8 Apr. 1805, and was again listed under ‘Pitt’ in July.

When the ‘Talents’ came to power William Adam numbered Mackenzie among the ‘Dundas etc. interest’ and he voted against the repeal of the Additional Force Act, 30 Apr. 1806. Yet after his return for Ross-shire on Seaforth’s interest at the general election of 1806 Adam put him among the ‘friends of government unconnected with Lord Melville’. This rather curious classification was academic, for Mackenzie had joined the military staff in Sicily in 1806 and commanded the Egyptian expedition early in 1807. He incurred no personal blame for the failure of the enterprise. He was returned again for Ross-shire at the general election of 1807. His inclusion in the list in the Morning Chronicle of 22 June of Members who were ‘totally unconnected’ with, and thought to be hostile to, the Portland ministry was probably an error caused by his being confused with John Randoll Mackenzie*, for he is not known to have opposed them. On 29 Mar. 1808 he was granted two weeks’ leave of absence to attend to urgent private business.4 Soon afterwards he went with Moore to Sweden and later in the year to Portugal. He distinguished himself at Corunna, received the thanks of the House, 25 Jan., and replied in his place, 1 Feb. 1809. In the summer of 1809 he commanded the third infantry division in the Walcheren expedition, but he caught the fever and returned home, only to die in London, aged 51, 13 Sept. 1809.5