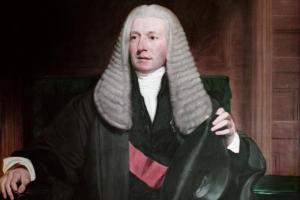 Manners Sutton, like his uncles, owed his seat in Parliament to his family connexion with the Duke of Rutland. His father, the royal choice for Primate in 1805, had provided him with a place in his patronage worth over £600 p.a.1 and he had just been called to the bar when he entered the House. He was listed among the ‘staunch friends’ of the abolition of the slave trade. In other respects, he was not well disposed to the Grenville ministry. Before proceeding on the Western circuit, he voted against them on the Hampshire petition, 13 Feb. 1807, and he shared his father’s hostility to Catholic claims. His first speech, as his father’s spokesman, was on the curates residence bill, 8 June 1808. He supported the Portland administration, defending the Duke of York and Castlereagh against their critics, 17 Mar., 25 Apr. 1809.

Manners Sutton was induced by Spencer Perceval in October 1809 to quit his profession and become judge advocate-general. He accepted on the understanding that, though appointed to the Privy Council, he might return to the bar on going out of office. The King approved the appointment—indeed, Nicholas Vansittart* complained that it was a ‘pretty good specimen’ of Court influence. Lord Auckland commented: ‘Mr Manners Sutton ... is a modest and sensible young man; but the office in which he is now put requires a knowledge of life, of law, and all the weight and character of years and experience’. Creevey quoted Lord Derby, too, as saying ‘from all he hears, he thinks the appointment of so young a man ... has given such offence, that a motion upon that subject would be a good one for the House of Commons at the opening of the session.’2 Nothing came of this, but Manners Sutton missed the opening of the session. He joined ministers on the Scheldt question, 23 Feb., 5 and 30 Mar. 1810, and was listed ‘against the Opposition’ by the Whigs. He voted against criminal law reform, sinecure reform and parliamentary reform, 1, 17, 21 May 1810. On 31 May he was named to the select committee on sinecures.3 That session the duties of his office involved him in opposing the petition of Captain Foskett, whose grievances against the army command were taken up by opposition; he denied (10 May, 7 June) that the House could be a proper tribunal of appeal for officers whose hopes of promotion were disappointed; indeed he had claimed at the outset (18 Apr.) that Foskett should have petitioned the King, not Parliament. On 26 Feb. 1811 he distinguished himself in his defence of William Gore Langton* against a corporal’s complaint taken up by Wardle for opposition.4

Manners Sutton, by now a great admirer of Perceval, rallied to ministers on the Regency question and was appointed to the House’s deputation to the Lords on the bill, 4 Feb. 1811. Had Lord Grenville returned to power, he was prepared to retain Manners Sutton in his office if it ensured his patron’s support. On 11 Mar. 1811, on the mutiny bill, he denied the necessity for provision of freedom of worship for Catholic soldiers and secured a clause offering the option of imprisonment in lieu of flogging in the army. He justified the reappointment of the Duke of York as commander-in-chief, 6 June. He rebuffed Sir Francis Burdett’s allegations about a soldier’s suicide to avoid flogging, 18 June, 1 July 1811. On 4 Feb. 1812 he opposed Morpeth’s critical motion on Ireland, claiming that the time was ‘completely unfit’ to concede Catholic relief. Francis Horner* nevertheless thought his speech an omen:

I mention it as one of the signs of the time that my friend Sutton, the archbishop of Canterbury’s son, declined in express terms committing himself to an opinion, one way or the other, whether there might be a time when the Catholic petition could safely be granted. The strong sentiments which I have heard him formerly avow contrasted with this forbearance, render it in his situation no equivocal token of the present indifference of the heads of the Church; the Regent has only to manifest a sentiment either way, and the breath of his mouth will be to the bishops the word of God.5

Manners Sutton voted against sinecure reform, 7, 21, 24 Feb. 1812, but his only further contribution to debate that session was on flogging in the army, raised by opposition in the discussion of the mutiny bill, 6 Mar. He pointed out that it had declined since the year before, but that the alternative of imprisonment was not practicable during active service and there could be no question of abolishing flogging. On 13 Mar., 15 Apr. and 14 July he resisted Burdett’s and Bennet’s efforts in this direction, admitting ‘that no man ought to be liable to more lashes at one time than he could bear’, but declining to give Bennet a guarantee that, if a sentence was not fulfilled on one occasion, there would not be a second one to complete the number of lashes imposed. (He repeated this refusal on 15 Mar. 1813.)

The assassination of Perceval released him from his political allegiance and he was mentioned for high office in Lord Wellesley’s plans for an administration—in one list as chancellor of the Exchequer with the duchy of Lancaster, in another as Irish chief secretary, in a third account as Home secretary. But he was satisfied with the status quo; on 29 May 1812 he was ‘loud in ... praises of the Prince, and said that no human being ever showed more firmness than he has done’.6 On 2 Mar. 1813 he was a prominent opponent of Catholic relief and he resisted the relief bill on 24 May, because it gave inadequate securities. He complained that the stipendiary curates bill left too little to the discretion of the bishops, 13 July 1813. But he remained in the second line in debate, despite ministerial declarations in favour of bringing him to the fore, and in November 1813 report had it that Speaker Abbot was to have a peerage and Manners Sutton to succeed him in the Chair. In anticipation of this, the archbishop was alleged to have promised Manners Sutton’s ecclesiastical sinecure to his younger son. In July 1814 Canning certainly informed Speaker Abbot that government had earmarked Manners Sutton as his successor.7

In the House, nevertheless, his speeches were confined to his official business. On 29 Nov. 1813 he conceded to Romilly that if a first flogging produced all the suffering intended, the completion of a sentence on a second occasion would be ‘improper, unjust and even illegal’, but he declined to insert a clause in the mutiny bill to that effect. He refuted an allegation of Bennet’s about an abuse of flogging reported in the press, 23, 27 June 1814. His speech against Charles Palmer’s motion against his colonel, 17 Nov. 1814, was described by Vansittart as ‘a masterly specimen of close reasoning, and of discreet management of a delicate statement’.8 On 7 Mar. 1815 (and again on 15 June) he thwarted an attempt to tack a clause on to the mutiny bill requiring the dismissal of an officer to be endorsed by a general court martial. On 8 Mar. he opposed Romilly’s motion to limit flogging sentences to 100 lashes. He conceded, to Horner, a clause offering some indemnity to deserters who voluntarily surrendered, 15 June. He opposed Bennet’s motion to abolish flogging, refusing even to abolish it at home rather than abroad, 21 June. On 13 June 1816 he defended his uncle the Irish lord chancellor against his critics. He paid tribute to Francis Horner, 3 Mar. 1817. On 30 Apr. he obtained leave for a statute to consolidate legislation on the residence of the clergy (57 Geo. III c.99). He was engaged in refuting press allegations about flogging taken up by Burdett in May when the Speaker resigned.

On 2 June 1817 Manners Sutton, the ministerial choice, was elected Speaker by 312 votes to 150. He cast his vote for his opponent Charles Williams Wynn. There had been reports of William Sturges Bourne, Canning’s friend, replacing him as the official favourite, but nothing came of it. Williams Wynn wrote afterwards:

In fact there was no one recommendation of Sutton except his high connections which does not equally attach to twenty more. He is a very amiable man of excellent character, but had never taken the slightest part upon any question which concerned the privileges or orders of the House or appeared to pay any attention to them. Some inconvenience will at first arise from his want of knowledge but a very moderate degree of industry will enable any one soon to acquire it.

As if to forestall such criticism, his proposer Sir John Nicholl, after paying tribute to his performance as judge advocate, added:

Although he has not usually taken a leading part upon matters of order, and the course of our proceedings, yet I have reason to believe, that he has not been an unattentive observer of these subjects; that the law of Parliament and the rights, privileges, and usages of this House, have been particular objects of his private study.

In accepting nomination, he had admitted that the Chair was the object of his ambition; but he

certainly did appear very soft indeed, and actually broke down in his speech and protestation from the chair. However, it was enough no doubt to sweat any man, luckily he was at the end of a sentence when his presence of mind failed him, and he stood for about a minute blushing and silent and with quaking knees, and then gave in and sat down after undergoing a premature Hear! Hear!

In good earnest I am assured that Sutton must fag hard during the vacation, or he will be forced to resign ... from sheer incapacity. Lord Lonsdale is at the bottom of the whole affair, he wanted Sutton’s place for his accomplished son-in-law Beckett.9

The person and voice particularly are in favour of the new Speaker. Indeed there is a particular grace and appropriate solemnity in his voice, as well as sweetness of tone which reminded me of the late Lord Camden’s and of his eccentric nephew George Hardinge’s. But Mr Sutton is awkward in his person and gestures.

He added that he could not match Charles Abbot for business acumen. He made up for this by enlisting Abbot’s counsel until he felt secure. According to a later critic, Edward John Littleton, 21 Feb. 1818, ‘The manner in which he lives—his house—his table—his demeanour—render his receptions the most pleasing and magnificent possible’. Lord Folkestone wrote on 23 Feb., ‘We all like our new Speaker most extremely: he is gentlemanlike and obliging’. Peel, proposing his re-election in 1818, claimed, ‘He has sought, and he has obtained, the confidence of the House’. On 2 June 1818 he called for a tighter enforcement of the orders of the House on private business. The circumstances of the prorogation prevented him from making the Speaker’s usual prorogation speech, 10 June 1818. He continued to display much to commend himself to the House until his party feelings eventually obtruded.10 His interpretation of his functions was indicated by his remarks to the House on 7 Dec. 1819:

It was not, perhaps, necessary that their laws and regulations should always be observed to the letter; but unless the spirit of them was preserved, they would not be able to preserve their own dignity, or to carry on the business of the public with that celerity and regularity which was absolutely necessary.