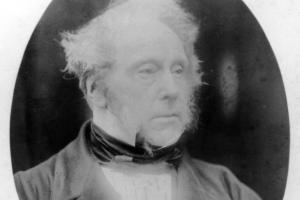 Palmerston was proud of the ‘useful knowledge and habits of mind’ he imbibed at Edinburgh as a protégé of Professor Dugald Stewart and, on proceeding to Cambridge, less impressed by his education there; but he became president of a debating club he called the Fusty, which anticipated the debating union. His tutor Dr Outram suggested that as he ‘had always been in the first class at college examinations and had been commended for the general regularity of my conduct, it would not be amiss to turn my thoughts to standing for the University whenever a vacancy might happen’.1 When Pitt’s death caused one in January 1806, he had already rejected an overture from Southampton, the borough nearest his Hampshire home.2 Before coming of age, he was an orphan; his father had died before obtaining an English peerage, which would have made him ineligible for a Commons career. It was his chief guardian Lord Malmesbury who now directed him to Cambridge. The moment was inauspicious: Pitt’s party was demoralized and his competitors, Lords Henry Petty and Althorp, were friends of the Grenville ministry: he was regarded as standing on the Court interest and as the St. John’s candidate against Trinity. Seeing that he was ‘but a lad’, Dr Milner forcibly converted him to the abolition of the slave trade in exchange for the votes of the ‘Saints’, but he came bottom of the poll. A journal he kept at this time showed his awareness of the weakness of the government in their bid for peace, and keen observation of foreign affairs.3 He failed to secure an opening before the general election of 1806, when he found Cambridge hopeless and, with his guardian’s son, contested Horsham on the Irwin interest. After a double return, he was unseated: a seat for three months would have cost him £5,000. He subsequently hoped to come in for Great Yarmouth as the result of a petition there, but nothing came of it, despite his canvass of the dockyard outvote.4

Palmerston was offered a seat at the Admiralty by his guardian’s friend the Duke of Portland in April 1807. He was again unsuccessful in his contest for the university seat, refusing his friends’ pleas to break his agreement with a fellow ministerialist candidate, the attorney-general, whom he might have pipped. His guardian had procured him a seat to fall back on for Newport, where the proprietor returned him ‘on condition that I should never set foot in the place’. In August 1807 Canning was assured that Palmerston would ‘jump at’ the under-secretaryship at the Foreign Office which Lord FitzHarris was resigning. He himself informed his guardian that this office, though ‘a very laborious one’, was ‘so interesting and so good a trainer that I would willingly undergo the fatigue attending it’. As Canning, who was pre-engaged to Charles Bagot, was agreeable to an exchange of offices between them, Palmerston was disappointed that it was impracticable.5

On 3 Feb. 1808 he first spoke in the House in defence of the Copenhagen expedition. Lady Holland commented, ‘Lord Palmerston’s maiden speech was not attended either with the bad or good qualities of a young beginner; he had practised in debating societies, and formed an unimpressive, bad manner’. That autumn he visited his Sligo estate and viewed with indignation the uneducated and ‘miserably oppressed’ state of the undertenantry. He had grown weary of an office that involved merely signing his name when Perceval in October 1809 offered him, if Robert Pemberton Milnes declined, the option of becoming chancellor of the Exchequer at the recess, with a seat on the Treasury board until then and a seat in the cabinet, or secretary at war. After consulting his guardian, Lord Mulgrave his chief, and Robert Ward* his colleague, he decided that the Exchequer was ‘too hazardous an attempt for so young and inexperienced a man’ and chose the secretaryship at war, ‘better suited for a beginner’. Perceval then offered him a seat in the cabinet to go with it, but ‘from the same modesty which guided his former conduct’, he declined it. He had no illusions: a government that could offer the Exchequer to a man who had spoken only once and had no knowledge of finance must be ‘too weak to stand’. Others readily saw his appointment as a sign that ‘the standard for recruits is lowered’, and Lord Lovaine* was slighted. Yet he remained secretary at war for the next 19 years and liked his office from the start.6

I never heard statements made with more precision and clearness in the House of Commons, nor more ably supported; the ability with which that was done drew marked approbation as well as applause from both sides of the House. This was very different from a set speech on any particular occasion, and holds out great promise.

He had more difficulty in his relations with Sir David Dundas, commander-in-chief of the army, who was reluctant to account for payments made to aides-de-camp and clothiers. He continued to prove from official documents that ‘the commander-in-chief presides over the discipline, and the secretary at war over the finance of the army’, adding that his duties placed him ‘between the army and the people’ (16 Aug. 1811). The Regent, on Perceval’s advice, shelved the question, but Palmerston insisted on his right of entrée to the closet, although he was not in the cabinet until 1827.7

In March 1811 Palmerston gained the vacant seat for his university at his third attempt. A year later Lady Minto had this to say of him:

Harry is doing very well—with a clear head and a good understanding. He will never be a great man because he has no great views, but he is painstaking and gentlemanlike to the highest degree, and will always swim where greater talents might sink. Nothing can be more amiable, and I have always regretted that he should have set out in life on the shabby side, which he must now stick to.8

He had voted against parliamentary reform, 21 May 1810, and voted against sinecure reform as well. When in 1812 he might have replaced Wellesley Pole as Irish chief secretary, however, ‘particular circumstances and considerations led him to decline it at once and without the least hesitation’. On 22 June 1812, and again 1 Mar. 1813, in defiance of his constituents’ petition of 8 Dec. 1812, he made it clear to the House that he was a supporter of Catholic relief, for which he invariably voted thereafter. He made his second visit to Ireland in 1813 and also found time to make continental tours in 1815, 1816 and 1818.

He acquitted himself of his main responsibility, the annual presentation of the army estimates, in a manner calculated as much to irritate as to impress: he affected incomprehension of the opposition’s enthusiasm for debating anything so statistical—what he called ‘trifling with the public understanding’9—and disinclination to speak on anything else. On first presenting the estimates he had conjured up ‘the insuperable barrier of a high-spirited, patriotic and enthusiastic people’ against Buonaparte. Subsequently he paid more attention to detail. He resisted opposition bids to undermine him on topics such as tax relief for officers, the military code, dismissal of officers without court martial and the German legion and lampooned them anonymously in the New Whig Guide (1815); in 1816 he repelled their onslaught on the size of the military establishment, refusing to relate it to fears of radicalism at home. In 1817 and 1818 he voted for ministerial measures against the radicals. It was not a radical, but an insane lieutenant on half-pay who attempted to shoot Palmerston on 8 Apr. 1818. He was nevertheless enough of an alarmist to sign the Hampshire counter-requisition against a meeting to censure the Manchester magistrates in 1819, justified it in the House, 2 Dec., and remained in town until 23 Dec. to vote for restrictive legislation.

During sixteen years that I had sat in Parliament with him previously to 1828, I do not recollect an occasion of his opening his lips on any except the ordinary business of his office, which he managed with apparent ease. He slept much in the House of Commons, and never omitted, if he could get away by twelve o’clock, to trot home in his cabriolet, and dress himself, and go to some party. He was a beau, and his society much liked by ladies. Indeed he was very popular generally, from his talents, his great knowledge of the world, and his address and polished manners. During the whole of that time he kept a few good race horses and was a great winner of country stakes.

He resisted a peerage and India for the sake of the House of Commons, joining Canning in 1827 and the Whigs in 1830, when as Foreign secretary he began his career as a European statesman. He died 18 Oct. 1865.