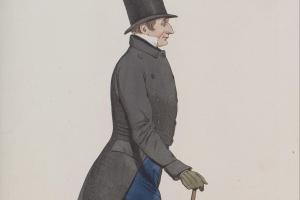 In the intervals of a distinguished military career that took him to many theatres of the war against Napoleonic France, Wilson was an enthusiastic military historian and publicist. In 1802 he chronicled the British expedition to Egypt. In 1804 he was complimented by Sir Francis Burdett, whose detestation of military flogging he shared, for his expression of it in his Inquiry into the present state of the military force of the British Empire with a view to its reconstruction. His father had wished him to enter Parliament and in 1804 he hoped to contest a by-election at Liskeard with the support of the Prince of Wales, to whose claims to a military command he lent his pen, but the Prince asked him to give the preference to Thomas Sheridan. In 1806 he offered Windham his congenial views on military reorganization.1

Having accompanied his friend Lord Hutchinson to Prussia in 1806, he brought home a message of repentance from Tsar Alexander, which the Tsar repudiated in 1807. He subsequently commanded the Lusitanian legion in the Peninsula. His being in foreign service was an obstacle to his receiving the thanks of the House for his services in February 1810. He renewed his links with the political opposition on his return home, that is with Hutchinson and with Grey, the Whig leader. He bombarded the latter with criticisms of Wellington’s operations in the Peninsula. In 1811 and in February 1812 he approached Canning, posing as Grey’s emissary, to offer him a junction with the opposition; Canning did not know how much credence to give him and was cool.2 He was again abroad from 1812 until 1814 as military adviser to Sir Robert Liston’s mission to Turkey, then ‘incalculably useful’ in Russia, and as a combatant commissioner to the allied armies, keeping Grey informed of his movements and critical views of his compatriots both then and after his return, when he was disgruntled at not receiving the honour of KB after being showered with honours by the continental sovereigns. Membership of Brooks’s Club was no consolation. He tried to infect Grey with his own wishful thinking that the government was tottering.3

On the conclusion of hostilities he proceeded to Paris, where he assisted in the escape of Buonaparte’s accomplice the Comte de Lavallette, of which his chronicle to Grey was intercepted by the French authorities. He was arrested and his disgrace was expected. Grey’s best friends, who had ‘long lamented his connexion with Sir Robert Wilson and the folly of the man’, now hoped ‘to convince Grey that they were right’. But Grey did not abandon him, when he was sentenced with his accomplices to three months’ imprisonment. The Prince Regent publicly disavowed his conduct. On his discharge Wilson returned home, having spoilt his chances of military promotion and with the reputation of a ‘restless busybody’, plotting to restore Buonaparte.4

Wilson had since 1814 again aspired to a seat in Parliament. Now he had an additional motive for it. Having been offered an opening at Penryn for £3,000, he rejected it on receiving a more tempting offer from Maidstone to bring him in free of expense in August 1816. Meanwhile he urged Grey to declare in favour of parliamentary reform and conciliate the radicals. Grey discouraged him on both counts. In 1817 he assisted the abortive Whig plan to run an evening paper and deplored their inability to keep up with public feeling. On the death of Ponsonby, the Whig leader in the Commons, he wrote that he had ‘not venom enough in him for the times. The Devil himself is wanted to confront Castlereagh and co.’ He thought Fox’s name was a dead letter and urged the opposition leaders to confront the Regent with a plea for a change of system. In January 1818 at the very moment when his ‘parliamentary ardour’ was ‘very much chilled’ he was invited to offer for Southwark as a reformer, but declined on learning that he would prejudice the chances of the Whig Member, Charles Calvert. A month later, he rejected Maidstone also, on grounds of expense. He was present at the foundation of the radical Rota Club, 21 Feb., and was this time induced to offer for Southwark, where he appeared on 20 Apr., escorted by two Whig Members, Bennet and Lambton and by Robert Waithman, for his adoption. He was promised assistance by the Westminster committee, putting himself out of the question in that constituency from loyalty to the reformer John Cartwright. He succeeded in ousting the ministerial Member in the Southwark election, by an uneasy coalition of radical and Whig support which no honest man could hope to please.5 In the Westminster election, too, he voted both for Romilly and Burdett, but on 5 Jan. 1819 he withdrew from membership of the Rota Club.

Wilson concurred in Tierney’s leadership of the opposition in the House, with reservations. Tierney had discouraged him from offering for Southwark and he disliked his ‘timidity and love of rat catching’. Nor did he wish to surrender his views on reform or the interests of his constituents. Grey tried to calm him and warned him not to spout too hastily, but on 26 Jan. 1819 in the committee of supply, he called for a reduction of taxation, an end to paper currency and for parliamentary and penal reform. William Huskisson was delighted and informed his wife that ‘the great Sir Robert Wilson who made his debut last night was damned. His speech was arrant nonsense, and his own friends were half disposed to cough him down.’ Wilson’s friend Lambton informed Grey that what he feared had occurred:

Wilson would speak for the mere sake of speaking. He ... introduced every species of topics. The consequence was that he set the House against him, and I very much feared a general coughing would ensue. It was solely his want of judgment in timing ill his speech, for his manner and voice were good, and if the occasion had called for his saying anything, I am sure he would have succeeded; but, it was so evident that he got up to make a speech, that it failed entirely ... It is exactly as you foretold, and I had mentioned your opinion and warned him of the consequences, therefore he alone is to blame.6

Nothing daunted, Wilson was on his feet again on 2 Feb. 1819 to support his constituents’ petition against the coal duties, next day opposed the Westminster hustings bill and on 4 Feb. launched the case against Wyndham Quin*. Brougham assured Grey that he did this ‘admirably’, was ‘now quite docile and may therefore do’.7 On 17 Feb. and 23 Mar. he opposed petitions for agricultural protection which could only inflame the labouring classes. He approved a policy of splendid isolation in foreign affairs, 19 Feb. He called for the equalization of the coal duties, 2 Mar., and concurred in the vote of thanks to the Indian army, 4 Mar. He opposed the trial by battle abolition bill, 22 Mar. On 8 Mar. he said he hoped reform would not be confined to the borough of Penryn. On 29 Mar. he summed up the case against Wyndham Quin which he had been conducting, in six resolutions, concluding that Quin was in breach of privilege, but an amendment was carried with ministerial aid by 154 votes to 81. He supported Catholic relief, 3 May, though 12 years before he had privately declared that he would never support it.8 On 17 May, rather than extend the franchise at Barnstaple, he proposed the transfer of it to Leeds, giving Barnstaple electors the right to vote for Devon; the motion was defeated by 110 votes to 12. On 26 May, presenting a petition from Chorley for the disfranchisement of Penryn for Chorley’s benefit, he declared that he would not agree to a shilling of additional taxation until some such step towards reform was taken. He led the opposition to the foreign enlistment bill, 3 June. On 9 June he warned ministers that excessive taxation had caused the French revolution and, opposing the excise duties, 25 June, added that ‘it is the last feather that breaks the horse’s back’. On 1 July, in support of Burdett’s reform motion, he urged that as the economists had failed to check the government, reform was the only alternative, though he thought the motion ill-timed.

It was Wilson’s ambition to reconcile Whigs and radicals on the reform question. He had at first favoured the candidature of his Rota Club friend John Cam Hobhouse† for Westminster in 1819, but on withdrawing from the Rota was active in support of the Whig candidate Lamb. On 26 Nov. 1819, in the debate on the report of the address, he called for a conciliatory system which did not place the radicals beyond the pale. His own public gesture of friendship with Henry Hunt disquieted alarmist Whigs, but he made light of it. On 29 Nov. he was met with marks of impatience in the House when he seconded Burdett’s motion on the Manchester petition against the conduct of the magistrates at Peterloo—he had contemplated a reconnoitring visit to Manchester. On 6 Dec. he opposed the seditious meetings bill in apocalyptic style: national bankruptcy and revolution were at hand. He criticized all the repressive measures introduced by ministers that session, 24 Dec. On 19 Jan. 1820 he told Hobhouse, who saw him as a pitiful figure torn between Whigs and radicals,

how disgusted he was with public life and how he was resolved almost to take the Chiltern Hundreds and live in France—he said want of money in this country sunk a man below his level—he told me if the Whigs came in they would do nothing ... here is a man who sees right and acts wrong—he has lost all weight in the House.9

Wilson saved his face for a decade by political martyrdom in 1821, but was discredited in 1831 through lack of enthusiasm for the reform bill.10 He died 9 May 1849.