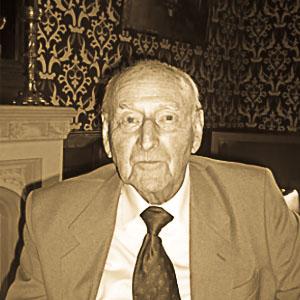 Born in Dulwich on 18 January 1928, Terence Higgins was educated locally. He served in the RAF between 1946-48 before pursuing a career in running, becoming a Commonwealth silver medallist and competing in the 1952 Summer Olympics. He then attended Gonville and Caius College, Cambridge when he became President of the Cambridge Union in 1958. He married Rosalyn Higgins and they have two children. Rosalyn was the first female judge elected to the International Court of Justice, becoming President in 2006. She was made a Dame in 1995.

Terence Higgins was elected Conservative MP for Worthing in 1964 and held the seat until retirement in 1997. He became an opposition spokesman for Treasury and Economic Affairs and in government held junior ministerial posts at the Treasury between 1970 and 1974. He continued these roles in opposition before returning to the backbenches in 1976, serving on the executive of the 1922 Committee between 1980 and 1997. After stepping down from the Commons he was created a life peer as Baron Higgins of Worthing.

Click here to listen to the full interview with Terence Higgins in the British Library.

The crucial issue was Rhodesia. I was very much against Ian Smith, whereas my constituents were almost 100% in favour of Ian Smith. The other crucial issue was capital punishment, that came up. I was persuaded by the speech of the former Home Secretary [Henry Brooke] and in due course voted against capital punishment. I think my constituents thought I wasn’t really concentrating at the time, or didn’t listen to the debate! […] The combination of capital punishment and Rhodesia caused some problems in the constituency. My Chairman…did not share my views on either subject, but was extremely loyal, I must say. The issue became one of great national importance, on Rhodesia. A meeting was held by the pro-Smith crowd, who were very strong along the south coast, in the Assembly Hall in Worthing. Public meetings not being like public meetings now, something like 1400 people turned up. There was a huge row. At the end the chairman, who claimed to be a judge of the International Court, tried to pass a motion in favour of Ian Smith. There had been no motion on the floor ahead of that, one hadn’t been debated. I refused to allow that, I grabbed the microphone, he grabbed the microphone, it was all frightfully spectacular at the time! So anyway the motion was not put or carried, but it was slightly disrupted. As I say my Chairman fortunately was very supportive, and so was the association on the whole, despite the fact that they certainly tended to disagree with my views.

Track 1 [00:00:13] [27 April 2012] Terence Higgins, Lord Higgins’ [LH] parents lived in Dulwich. Father served in First World War and ship broker for William Hill and Company. Recounts father’s service in the trenches and survival. Father re-joined the Baltic Exchange until retirement. Father served as Air Raid Warden during the Second World War and largely responsible for wartime grain shipments to the UK. Retired after the War and family moved with LH’s mother to near Brighton. [00:02:00] LH oldest son, born 28 January 1928. One brother and one sister. Attended Dulwich Prep School. Evacuated twice, once to Cornwall and then with Alleyn’s School to Rossall, Lancashire. Completed O-Levels and A-Levels. [00:03:00] Left school and entered the shipping industry. Recounts involvement with Board of Dulwich College, Alleyn’s School and James Allen’s Girls’ School and with charity for music tuition. [00:04:11] Mentions friend who became principal ballet conductor at the Royal Opera House and then in Sydney, Australia. Talks about becoming school prefect. [00:05:16] Not an academic student. Obtained A-Levels in Economics, Geography and History. Joined RAF immediately after school to cover for demobbed airmen. [00:06:18] Became instrument repairer and helped repair cypher machines. Was unaware of Bletchley Park at the time. Churchill then decreed the cypher machines should be destroyed. [00:07:19] Most of time in RAF spent running. Was RAF 440-yard champion and European Combined Services champion for the 100-metres. Was selected for the 1948 Olympic Games, but did not then compete in the relay. Stationed at Uxbridge during National Service. [00:08:28] Competed in the Empire Games in Auckland in 1950. Remained in New Zealand after the Games with shipping company. [00:09:39] Competed in the Public Schools London Athletics Club Championships whilst at school. Talks about huge differences with current, professional athletics. [00:11:42] Mentions similarity between athletics and political speech-making. Describes history of politicians who had competed in Olympic teams, including Menzies (Ming) Campbell. [00:13:00] Worked at the shipping company for seven years after demobilisation. Describes combination of working and athletics training. [00:14:05] Describes decision to go to university. Applied to Oxford and Cambridge. Mentions interview at Brasenose College. Accepted for Geography at Oxford and Economics at Cambridge. Describes weekend spent deciding between the two. Mentions fortunate not to have read PPE. [00:16:20] Chose to go to Gonville and Caius College, Cambridge. Mentions Professor Stanley Dennison. Describes momentous  choice between Oxford and Cambridge. [00:17:35] Describes prioritising degree and Cambridge Union over athletics. Became Union President in final year. [00:18:16] Talks about athletics training at Cambridge. Mentions tutors in first year were Stanley Dennison and Peter Bower. In second year tutored by Sir Dennis Robertson. [00:20:00] Describes split between right and left-wing academics at Cambridge at the time. Talks about inviting C. P. Snow to Cambridge. [00:21:32] Got a 2:1. Talks about meeting wife. Describes meeting Professor William Fellner. [00:23:05] Invited by Fellner to teach at Yale. Explains worked in New York for shipping company before going to Yale. [00:24:19] Mentions wife worked as intern at the UN. Mentions Fulbright travel fellowship. [00:25:46] Returned to UK and worked again at shipping company. Describes advice to company to buy second-hand ships. [00:26:45] Moved to work for Unilever for four years. Describes office. Unilever economics department headed by Ronald Brecht and then Maurice Zinkin. [00:27:35] Unilever allowed employees to pursue politics. [00:28:29] Shared office with Merrett and Sykes. Helped to write Capital Budgeting and Company Finance. [00:29:07] Describes decision to get onto candidates list. Talks about friendship with Sir Paul Bryan. [00:29:35] Talks about change in Conservative Party’s attitude towards candidates. [00:30:40] Mentions Enoch Powell’s record of failed selection interviews. Recounts fighting selections for 1964 general election against David Mitchell, Geoffrey Howe and Patrick Jenkin. [00:31:35] Describes Bebington selection. [00:32:24] Short list for Bebington seat of LH, Paul Davis and Geoffrey Howe. Howe selected. [00:33:44] Mentions subsequent Howe defeat in Bebington. [00:33:35] Mentions majority in Worthing was 32,500. [00:34:12] Mentions selection in Wanstead and Woodford with Patrick Jenkin. Describes selection questioning on the Profumo affair and retail price maintenance. [00:35:52] Adopted as candidate for Worthing. Served as MP for Worthing from 1964 to 1997. Mentions changes to journey time from London to Worthing. [00:36:48] Mentions was never pressed to live in constituency. [00:37:20] Explains positions on Rhodesia and capital punishment. [00:40:01] Mentions views on Rhodesia and capital punishment caused problems in constituency. Chairman, Dennis Fry, was very loyal. [00:40:35] Describes meeting in Worthing of pro-Ian Smith group. Julian Amery and John Biggs-Davison invited to speak. [00:42:35] Association very supportive. Right-wing organisation did attempt to de-select LH. [00:44:20] Called public meeting. Motion against LH defeated. [00:45:25] Recounts seeing ringleaders again at party conference with Anthony Barber. [00:45:35] Describes 1971 party conference debate on Rhodesia and speech on VAT.  [00:47:02] Mentions that he was convinced he was going to lose 1964 general election. [00:47:45] Tells story of election motorcade running into that of Labour opponent, Anthony Lester. [00:48:37] Describes campaign to introduce personal right of petition to the European Court of Human Rights. Mentions Harold Wilson did not consult Cabinet on the issue. [00:50:14] Says that he was in Worthing between 1964 and 1997. [00:51:09] Describes demography of Worthing. Talks about constituency surgeries. [00:51:49] Describes changing role of a Member of Parliament. [00:52:08] Describes Commons accommodation in 1964. [00:52:58] Describes secretarial arrangements and attitude to constituency correspondence. [00:54:16] Mentions Barbara Wallace who became PPC in Feltham. [00:54:54] Barbara Wallace bought the first electric typewriter in the House of Commons. [00:56:10] Talks about rise in number of Treasury ministers. [00:57:10] Mentions Finance Bill and Prices and Incomes Bill. [00:58:00] Explains Commons sitting hours. [00:59:17] Tells story about impact on committee of change of government. [01:00:56] Describes Jim Callaghan’s last minute announcement of Selective Employment Tax in Budget speech. [01:02:22] Talks about arriving at the Commons for the first time. [01:03:13] Describes view of Alec Douglas-Home. [01:04:12] Talks about Iain Mcleod’s view of Labour government and shock for Conservatives of opposition. [01:04:51] Describes maiden speech and campaign for pension rights for people aged over eighty. Mentions Labour filibuster. [01:07:09] Talks about split in Conservative Party on Rhodesia and reaction of Willie Whitelaw. [01:08:25] Talks about lack of Members’ facilities. Mentions secretary’s desk in Old Palace Yard. [01:10:03] Talks about getting used to Commons procedure. [01:10:21] Describes travel to Worthing and missing connection on first visit.

Lord Higgins - 23 July 2013
Part 3, Track 4  [00:16:39] Talks about the election of John Major as Conservative leader in 1990. [00:00:29] Talks about Margaret Thatcher's decision to go to Paris after the first ballot. Mentions reaction of 1922 Committee and Cabinet colleagues on her return. [00:01:06] Mentions involvement in the Major campaign with John Major Parliamentary Private Secretary, Graham Bright. [00:01:16] Talks about concern that John Major would not be back from his constituency in time to submit nomination papers. [00:01:36] Mentions that favoured Proposer, Norman Lamont, was tied up in Cabinet meeting. [00:01:57] Talks about meeting in Treasury building. [00:02:07] Mentions that nomination papers prepared with LH as Proposer and Graham Bright as Seconder. [00:02:45] Describes the splits in the Conservative Party, including of the 1922 Committee, during the Major era. [00:03:34] Describes elevation to the Lords and immediate promotion to the front bench as Shadow Minister for Work and Pensions. [00:04:00] Talks about being supported in the role by Baroness Anelay, Baroness Byford, Baroness Buscombe and Baroness Noakes and talks about their future careers. [00:04:44] Talks about Coalition government and present backbench role focussing on economic affairs. [00:05:22] Talks about successful introduction of an amendment to the Same-Sex Marriage Bill [SSMB]. [00:05:52] Notes that also spoke from the Lords front bench on the Civil Partnership Bill [CPB]. [00:06:26] Describes rate public opinion has changed between the CPB and the SSMB. [00:06:50] Mentions government's insistence that CPB would not lead to same-sex marriage. [00:07:17] Mentions did not want to continue on departmental select committee in the Lords. [00:07:53] Expressed willingness to serve ad hoc committee, particularly on constitutional matters. [00:08:14] Talks about 2011 referendum on AV voting system. [00:08:31] Talks about opposition to House of Lords reform led by Lord Norton of Louth. Describes successful campaign against the recent proposals to reform the second chamber. [00:10:06] Campaign in the Lords led to a vote against the proposals in the Commons. [00:10:15] Talks about work on the House of Lords Select Committee on the Speakership of the House, including on election arrangements, following changes to the role of Lord Chancellor. [00:11:04] Talks about anxiety that role of Speaker in the Lords should not be same as in the Commons. Describes differences between the two. [00:11:54] Mentions stood in the 1992 election to be Commons Speaker. [00:12:57] Talks about Lords Speaker's outreach initiatives. [00:13:18] Talks about work on the Joint Committee on Conventions. [00:13:41] Mentions enhanced effectiveness of the House of Lords. Talks about increased workload from the Commons. [00:14:32] Talks about work of Leader's Group on Members Leaving the House and recommendations of Clerk of the Parliaments on reducing size of the Lords. [00:14:58] Talks about problems as a result of increased number of Lords. [00:15:38] Mentions significant number of Lords who could be incentivised to retire.
Part 3, Track 5 [00:07:21] Talks about current interests in the Lords including the Banking Bill and seeking an end to the export of live horses for slaughter. [00:01:00] Talks about participation in debates on 2012 London Olympics legislation. Mentions involvement in 1948 Olympics and 1950 Commonwealth Games. [00:02:15] Explains introduction of VAT and decimalisation as stand-out moments from parliamentary career. [00:03:12] Mentions 18 years service on select committees and their increased importance. [00:04:19] Talks Andrew Tyrie, current Chairman of the Treasury Select Committee. [00:05:15] Talks about regret at government programming of legislation. [00:05:44] Talks about MPs spending more time on constituency business. [00:06:30] Mentions relationship with Worthing constituency and stances on capital punishment and Rhodesia.