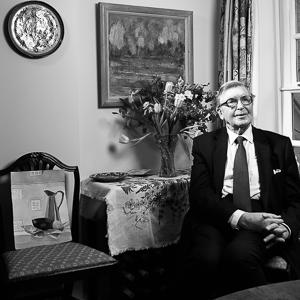 Charles Patrick Fleeming Jenkin was born on 7 September 1926 in Scotland. He was educated at the Dragon School, Oxford, Clifton College and Jesus College, Cambridge. He married Alison Graham in 1952.

At University, Jenkin was active in the Conservative student politics. He was called to the Bar in 1952, then worked in the chemical industry. A member of the Bow Group, he was a councillor on Hornsey Borough Council from 1960 to 1963, and became MP for Wanstead and Woodford in 1964 (succeeding Winston Churchill, who had sat for Woodford before boundary changes altered the seat). After just one year in Parliament he joined the front bench as the opposition spokesman on Economic and Trade Affairs. In 1974 he briefly served as the Minister for Energy until Labour returned to government. During Margaret Thatcher’s years as Prime Minister, Jenkin was Secretary of State for Social Services (1979-1981); Secretary of State for Industry (1981-1983) and Secretary of State for the Environment (1983-1985).

He stood down from the House of Commons in 1987 and was made a life peer as Baron Jenkin of Roding, of Wanstead and Woodford in Greater London.

Click here to listen to the full interview with Patrick Jenkin in the British Library.

[After Heath’s government] Of course, your car is immediately taken away […] and the first morning that I had to walk to the tube I believed that all the way along the road that people were drawing their curtains back and pointing and laughing. And of course that was complete nonsense but that was what I thought. I felt in a sense humiliated because we’ve lost the election and I was here having to give up what I become used to over the previous four years. I very quickly said the right way to deal with this is to become totally involved in the job. And I become the Minister for Energy right at the end of the government and Ted Heath appointed me straight away, we can’t have a secretary of state for Energy shadow in the House of Commons, it’s got to go to the House of Lords, it had been Lord Carrington for a short time. So I became the junior member of the shadow cabinet with responsibility for the department of Energy, and there was a tremendous amount to learn and I just threw myself deeply into that. Very quickly I not only became more confident of what I was doing and more satisfied that I was playing an important part, but began to earn the respect not only of one’s colleagues in the House, but perhaps more importantly the industrial people outside with whom I was dealing and I made my business always to try to understand what it was the industries were being asked to do it. […] that was both my purpose and I think the impact of what I was doing then, so I gained the reputation for knowing what I was talking about. I think that is very important in Parliament. Sometimes Ministers who have shadowed the department in opposition then come in and have the reputation very quickly of being a Minister knows what he is talking about.