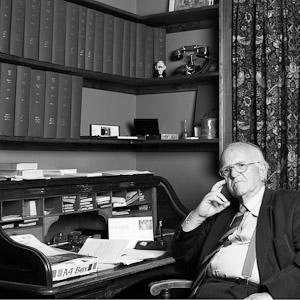 Frank Ashcroft Judd was born in Sutton, Surrey, on 28 March 1935, and was educated at the City of London School and the London School of Economics. He married Christine Elizabeth Willington in 1961.

He joined the Labour Party at 15, influenced by his father’s internationalism and his mother’s Labour activism. After unsuccessfully contesting Sutton and Cheam in 1959 and Portsmouth West in 1964, he was elected for Portsmouth West in 1966, which he held until 1974. Afterwards he represented Portsmouth North until he was defeated in 1979 by the Conservative Peter Griffiths.

During his time in the House of Commons served on the opposition’s front bench defence team (1972-1974), was Parliamentary Under-Secretary of State for the Royal Navy (1974-76), Minister of Overseas Development (1976-79) and Minister of State for the Foreign and Commonwealth Office (1977-79). After he left the Commons he became Director of Oxfam from 1985 to 1991. He was made a life peer as the Baron Judd of Portsea in 1991.

Click here to listen to the full interview with Frank Judd in the British Library.

“I found [Harold Wilson] a very good man, and warm man. What I really enjoyed was that it was possible to have intellectual discussions with him about issues of significance. I remember when he was visiting Portsmouth, … I can see him in the back of our battered old two door Volkswagen, sitting on the back seat with one of my three year old kids on his knee, chatting away. Just lovely. He also was very personally understanding… When we had differing approaches to what was then the Common Market, both under Ted Heath, the vote to go in, and then later, his own referendum to confirm membership, he was absolutely understanding of my position which was that I saw it as too narrow, I saw it more like a greater nation state at that juncture and was very much in favour of developing EFTA, and our relationship with the Nordic countries… he understood and respected that point but I also had the view that there was a great need to regenerate British democracy by a process of decentralisation and I thought that was the greater need rather than concentrating more authority in Brussels… As his PPS, just imagine it, could that happen today in modern politics? I very much doubt it. Because he was having a free vote there I was at a party meeting and subsequently in the House at my usual seat just behind where he sits, making a speech, putting forward my view, and he was discussing my speech later the same evening, interested by the points I was making. A very interesting man, I felt really privileged to work with him those two years.”

Track 4 [1:20:58] [0.30] Description of work as PPS to Harold Wilson, with Charles Morris who was also PPS. Story of Harold Wilson visiting Portsmouth and intellectual discussions. Description of Harold Wilson’s respect for FJ’s opposite position on Europe to him. [4:35] Description of other political friends including Tony Greenwood and Joan Lester. [6:45] Description of relationship with Tony Benn. [9:30] Anecdote about ‘Mr Benn’ cartoon and Tony Benn’s sending cartoon to FJ’s children with their faces stuck over. Details falling out with Tony Benn over aftermath of EC referendum, and his own take on European Community/European Union. [15:40] Description of sadness at Shirley William’s defection. His parliamentary pair was Clive Bossom. [17:00] Description of promotion to Shadow Defence team, Shadow Minister for the Navy. Became Parliamentary Undersecretary of State for Defence for the Navy after election victory 1974. James Callaghan promoted him to Parliamentary Secretary for Overseas Development. Became Minister for Overseas Development after Reg Prentice resigned. Tony Crosland was FJ’s boss. [20:00] Description of trying to retain budget for development. [22:00] Anecdote of being summoned to Downing Street to be informed of Reg Prentice’s resignation. [24:20] Description of parliamentary questions. Goes on to finish story of being summoned to Downing Street to be promoted by James Callaghan. [30:00] Anecdote about Tony Crosland’s support in conflicts between his department and Treasury which made FJ feel much more positively towards him. [34:08] Anecdote about James Callaghan, portrays him as light-hearted and wise. [35:00] Discussion of transition from Wilson to Callaghan administrations, how he found out that Wilson resigned. Indicates having doubts about his ministerial career because of policy. [36:30] Expands on these doubts, in particular being alerted by an Admiral about government continuing to sell arms to Chile after Pinochet coup despite saying they had stopped. FJ found this very politically uncomfortable. Led to conflicts with Secretary of State for Defence (Roy Mason) over the Chile issue and FJ had to take it to the Prime Minister (Harold Wilson). [46:10] Description of how he threatened resignation over this matter, shortly before Harold Wilson resigned. [47:30] Description of being summoned to 10 Downing Street by James Callaghan who moved him to Overseas Development because of the issues he had with selling arms to Chile. FJ unsure whether the policy of selling arms to Chile went on or not, did not ask about it after moving to Overseas Development. [53:00] Talks of Tony Crosland dying, his transfer to Foreign Office (Overseas Development) and discusses whether resignation over the Chile issue would have been effective. [55:00] Comparison between sense of foreboding about 1975 EC referendum and that of 1979 general election. [57:31] Description of how he held seat in 1974 because of strong Liberal vote but this collapsed in 1979 and as a result FJ lost election. [58:04] Talks of David Owen who was Secretary of State for Foreign Affairs and FJ’s superior, describes how he held ministerial group meetings not just about foreign affairs but cabinet issues in general. FJ found David Owen arrogant and dismissive of him for putting across his constituents’ concerns. [1:00:53] Claims Callaghan could have won 1979 election, compares his mistakes to Gordon Brown’s mistakes in 2010. [1:01:26] Description of losing 1979 election and the party that had been organised for his victory and how FJ’s life changed having lost both ministerial role and parliamentary seat. [1:03:45] Description of Buckingham Palace visit for defeated MPs where everyone was relieved to have lost their seat. [1:04:40] Description of conversation with the Queen, of whom he formed a higher regard the more he met her. The Queen gave FJ photographs that she had taken of FJ and her private secretary with a note. At the Palace the Chief Whip also offered him a peerage which FJ turned down. [1:09:47] Describes the thirteen years between losing his seat and becoming a peer which he enjoyed, international human rights work in particular, and was approached several times to become a peer. Decided to accept when FJ was Director for Oxfam when Neil Kinnock asked. [1:11:40] Description of relationship with Neil Kinnock, FJ had known Glenys Kinnock well (Neil’s wife). Expresses sadness at Neil Kinnock losing general election in 1992. [1:15:37] Talks of why he did not seek another seat after losing 1979 election. [1:16:10] Brief description of his Lords career, what he uses his seat in the Lords for, what he enjoys about it, how he doesn’t see it as a duplicate of the Commons. FJ states that he felt he was recruited to Lords as Director of Oxfam.