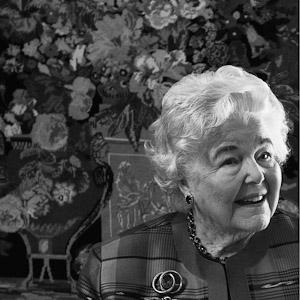 Joan Christabel Jill Knight was born in Bristol on 9 July 1923. Educated at King Edward Grammar School, she decided she wanted to pursue a career in politics at thirteen, her anti-socialist views influenced by her school life. She joined the Women’s Auxiliary Air Force (WAAF) in 1941 and after the war lived for a time in Hamburg. On her return to the UK she joined the Young Conservatives. She married James Montague Knight in 1947.

Knight was elected to Northampton County Borough Council in 1956 and was the Tory whip until 1966. After trying unsuccessfully to win the parliamentary seat of Northampton in 1959 and 1964, she was chosen from more than two hundred candidates to contest the Birmingham Edgbaston by-election in 1966; once elected she held the seat until 1997. That year she stood down from Commons and was made a life peer as Baroness Knight of Collingtree.

"I remember one Member saying to me when I went in the smoking room for instance – I don’t smoke, I never have, but that was where you had a glass of wine or whatever – this very much sort of old fashioned conservative said ‘Jill I thought you were a nice girl!’; ‘I am’, I said, smiling winningly, and he said ‘Not if you go in here, this is the smoking room’, ‘But it’s where the MPs gather and I am an MP, you know.’ That sort of thing I did encounter."