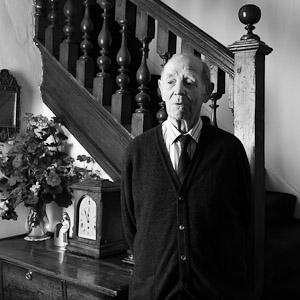 James Edward Ramsden was born in Liverpool on 1 November 1923. He married Juliet Barbara Anna Ponsonby in 1949. He was educated at Eton and Trinity College, Oxford.

Ramsden served in the army during the Second World War. He unsuccessfully contested two elections at Dewsbury in 1950 and 1951, before winning a seat in Harrogate in 1954. During his years in Parliament he served in the War Department and became Secretary of State for War (1963-64) and Minister of State for the Army (1964). He retired from Parliament in 1974.

"[Campaigning in Dewsbury in 1950 and 1951] was good clean fun. … There used to be children going around singing ‘Vote, vote, vote for Mr Paling / When he comes knocking at your door, / If it’s Ramsden and his wife / You can stick them with a knife, / And they won’t come knocking anymore!’ They used to sing that. One man I knocked up, I asked ‘will you vote Conservative?’  And he said ‘My dad said always vote for them as pays the wages’. My second election at Dewsbury … I’d been making a speech … and I suddenly noticed at the back of the hall the people looked like not quite ordinary people and I recognised Lindsay Anderson, the great film producer who’d actually been a fellow subaltern of mine in the Greenjackets, we’d shared a tent together. And we had a word afterwards and he flew at me like a tiger and he said how could you get up on that platform and tell all those lies, talk all that nonsense. …They’d been making some film in Ossett. That was a rather daunting experience. I never saw him again."

Track 2 [05:14] Discussion about JR’s early memories with father working as a Master of Foxhounds in Warwickshire; comment about mother writing report about the days sport for ‘The Times’. [01:37] Description of JR’s family background; mother’s family banking background in Yorkshire; mother’s father and eldest brother both killed in Boer War; mother’s brother Sir Murrough Wilson MP for Richmond; on father’s side JR’s uncle, George Ramsden was MP for Elland where JR’s ancestors had established a successful brewery in Halifax [?Thomas Ramsden and Son]. [03:46] Description of opportunities open to his father as youngest son; father joining Fifth Lancers; brief description of father’s involvement in the Mutiny at the Curragh [see also Track 6, 07:20].

Track 3 [03:14] Description of how JR’s parents met; description of parents meeting at Crathorne Hall, home of the Dugdale family; comment regarding significance of this for JR’s future political career; comment on Thomas Dugdale being MP for Richmond and family discussions that JR might succeed him. [01:19] Description of Nancy Dugdale (née Tennant) and her political influence on JR; describes invitations from Nancy to stay at Crathorne to meet politicians such as R.A. Butler.

Track 6 [10:09] Description as to how JR became interested in politics; JR still at Oxford University and pushed by Thomas Dugdale; JR encouraged to get experience of fighting an election at Dewsbury; comment on work with Young Conservatives in Halifax; comment about father being prospective Conservative candidate for Sedgefield. [03:29] Suggestion family not strongly political. [04:01] Description of connection with Dugdale family; awareness of family history in politics and possibility of taking Dugdale’s seat at Richmond; description of vacancy at Harrogate and luck at getting it; comment about need for a respectable war; comment about Maurice MacMillan also seeking selection for Harrogate seat. [05:53] Description of Father’s involvement in Unemployment Assistance Board in the 1930s; family awareness of political background to the family; description of father’s involvement in the Mutiny at the Curragh; JR suggests in own career he never had particular political goals.

Track 7 [05:11] Description of newspapers in childhood home; comment that Conservative orientation of family due to friends more than press; description of attending Oxford University and lack of pursuing politics at University; comment about dropping Greats before reading PPE; economics tutor Charles Antony Crosland; anecdote about studying with Tony Benn; comment about friendship with Thomas Macpherson, MC, at Oxford who had ‘had a good war’; comment about Marmaduke Hussey.