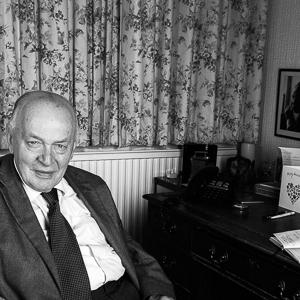 Edward MacMillan Taylor was born in Glasgow on 18 April 1937. He was educated at Glasgow High School and University, where he joined the Conservative Party. He became a Councillor at 22 and in 1964 he was elected for Glasgow Cathcart in a by-election. He married Sheila Duncan in 1970.

He served as Minister for Health and Education in the Scottish Office during Edward Heath’s government, but resigned shortly afterwards in opposition to Heath’s decision to join the ECC. A member of Margaret Thatcher’s shadow cabinet in opposition, he lost his seat when the Conservatives returned to government in 1979, although he won the Southend East by-election in 1980 and held the seat until he retired in 2005. He was one of the ‘Maastricht Rebels’ who voted against John Major’s bill to implement the Maastricht agreement in 1992, and lost the party whip, continuing to sit as an independent.

Sir Teddy Taylor died on 20 September 2017, and his interview has been featured on our blog.

Click here to listen to the full interview with Sir Teddy Taylor in the British Library.

I went in to the tea room, and the only people I knew were actually Labour MPs from Glasgow, they were very nice people so I went to have a cup of tea with them. It was very funny, I was just sitting down there, having a chat with them, and then there was a very nice man called Harold Wilson you might remember him, who came and said ‘Who are you?’ and so I said: ‘I’m Teddy Taylor’ and he said ‘You are a conservative?’ I said ‘Yes’ ‘What are you doing in this table?’ and I said ‘Well, these are my friends’ and he said ‘Oh, that is one thing that you’ll have to learn, we have segregation here’. He was very nice and just told me that something I should know for the future that we all sit in different places so we don’t listen to other people’s conversations. […] I found this when we went for lunch…I said ‘I don’t know where I’m going to sit’ and they said ‘The division here: that side is all the Labour side, that side is the Conservative side and one small, narrow table in the middle of the circle for the Liberal Democrats’. […] It worked perfectly like all these Parliament things do until something went wrong. Not then, but at an election a wee bit ahead there was a man elected to Parliament, for the first time as a Welsh Nationalist, called Gwynfor Evans. A very nice man, I got to speak to him and become very friendly. He was the first Welsh Nationalist, so he come in to get his lunch and he says ‘Where can I sit?’ and they say ‘ I’m afraid there is nowhere for you to sit, you would have to go to the other place to eat downstairs’. Which he did. He went to the dungeon downstairs, but they don’t have the tablecloths and waitresses, they just have a blackboard that never changes…He never complained, he went there for six months and enjoyed his lunches there, no trouble at all, but then we had a lady elected, you probably know, called Winnie Ewing who was elected as the Scottish Nationalist. Oh dear, dear, she caused all kind of trouble saying that it was upsetting, unfortunately for a woman and the Scots were feeling ashamed that they were not given a proper seat and something should be done about it. So they had a special meeting at the House of Commons Catering Committee and they said ‘Well we don‘t want to have a nationalist seat because that will just encourage more of them to come’. So eventually they decided to have what they call a Minority parties table.