Edmund Burke was born in Dublin, but he moved to London as a young man to start a career as a writer or politician. He was soon known for his charm and personality. In 1765 he became an MP.

Burke soon made alliances with leading Whig politicians, and was attracted to reforming causes. He attacked the British government during the American Revolution and strongly criticised the administration of India for its corruption.

Yet Burke’s career and political views were changed after the French Revolution in 1789. In France, people rose up against the autocratic rule of the king, Louis XVI, and demanded more political rights and a say in political decisions. Many people who supported reform in Britain initially welcomed the revolution, including Burke’s political allies.

Burke himself was deeply worried by the French Revolution. In 1790 he wrote a famous book, Reflections on the Revolution in France, which predicted that the revolution would soon become violent and chaotic. He criticised the revolutionaries for throwing out everything in the old system and ‘mindlessly’ starting again from scratch, based on theories, but not practice or history. Burke argued that the British system was much better because reform took place slowly, based on practical considerations and history. Burke’s work was also an attack on reformers in Britain who wanted to change the system.

Many of Burke’s old allies disagreed with him. The most famous response to his work was from the radical Thomas Paine. Paine had been involved in the American Revolution, and wrote a book called The Rights of Man. He argued that everyone had political rights. The government should guarantee these rights for everyone, and if they did not, revolution was an acceptable way to get them.

Many people supported Paine and wanted to radically change the system. However, as the French Revolution became more violent, more people came to support Burke’s ideas. They were afraid of the chaos a revolution could bring. In 1793, Britain declared war on France. This made those who supported reform even more dangerous to Parliament. The Prime Minister, William Pitt the Younger, used repressive measures against pro-reform groups: he prevented them from meeting and publishing books and newspapers that put the case for reform. Many were arrested and Paine himself was forced into exile. Those who had supported moderate reform before the French Revolution were also targeted.

Edmund Burke left Parliament in 1794 and in died in 1797 after a long illness. His writings and ideas remain highly influential to this day. 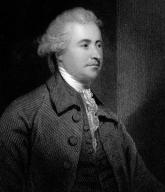 After original by Joshua Reynolds

Burke is often known as the ‘father of British conservatism’ because of his writings.