Feargus O’Connor was born in Ireland to a wealthy Protestant family. A ‘physically imposing’ man, ‘possessed of enormous energy and gentlemanly bearing’, O’Connor first trained as a lawyer before becoming involved in Irish politics. His talents as an ‘extraordinary’ public speaker were revealed, but he fell out with Irish political leaders and came to England.

Once in England, he soon became involved in working-class political movements, such as Northern anti-Poor Law groups. The 1834 Poor Law tried to make local government support for the unemployed or sick the same across the country, and also tried to keep costs down. The law introduced workhouses around the country and insisted that any support – such as food – could only be given inside them. Many working class people, who could lose their jobs easily if trade conditions were difficult, hated the workhouses because of their harsh conditions. However, there was no other option if you were injured, unwell or simply lost your job.

O’Connor’s work with anti-Poor Law groups led him to other working class political movements. He was made a member of the London Working Men’s Association in November 1836, the group formed by William Lovett that wrote the People’s Charter. O’Connor became more involved with Chartism. His newspaper, the Northern Star, became the unofficial journal of the movement. He helped create links with Thomas Attwood and the Birmingham Political Union, and supported the first Chartist petition launched in Glasgow in 1838.

Once Parliament rejected the People’s Charter, O’Connor became associated with the ‘physical force’ Chartists, who argued that the time had come to use violence to gain political rights. For example, he probably knew about, although wasn’t involved in, the Newport Rising (see Monmouth). After this the movement began to split apart.

In the repression that followed the failed rising, O’Connor was arrested. He was accused of encouraging rebellion in the Northern Star.  He was imprisoned for 18 months but continued to write from prison. O’Connor remained Chartism’s leading figure in the 1840s, and was elected to Parliament as MP for Nottingham in July 1847.

During 1848 the Chartists launched the third and final Chartist petition. Over 5 million signatures were said to have been collected, and at a mass meeting in Kennington Common, London on 10 April O’Connor addressed the crowd. However, the government was very nervous about this rally. Over 85,000 special constables and 8,000 troops were in place to meet between 20,000 and 50,000 Chartists. Fearful of the violence that could occur if the meeting marched to Parliament to present the petition, O’Connor convinced the crowd to let him deliver it instead. On doing so the petition was again rejected by Parliament.

After 1848 Chartism went into decline. In 1851 O’Connor displayed the first signs of serious mental illness, and had to be admitted to an asylum. He died in 1855 having given up most of his money to the movement. O’Connor is still remembered by historians as one of the major Chartist figures. 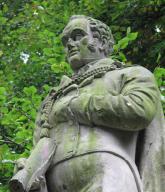 Parliament’s clerks counted under two million signatures on the third Chartist petition, and many of these were false – Queen Victoria and the Duke of Wellington had apparently signed it!