James was born in Hereford in 1828, a younger son of a surgeon. After school, he convinced his father to let him train as a lawyer. He was very successful at this – and made a large amount of money from it! A charming, attractive man, he had a wide circle of rich and important friends from the political, sporting and artistic worlds.

In 1868 he became a Liberal MP for Taunton. Although he originally lost the election, his rival candidate was accused of bribery, and James was declared the winner. There was a long tradition of bribery in British elections, from the early 18th century onwards. Voters at election times expected to be ‘treated’ to drinks or food by the candidates in order to gain their vote. Large amounts of money could be spent entertaining voters, and in other cases rich men could simply buy the votes of others. Although much of this changed by the introduction of the secret ballot (first held in Pontefract), there was no limit on how much candidates, or party officials, could spend at election time.

James briefly entered the cabinet in 1874 as Attorney General, the main legal advisor to the government. However, the Liberals lost the election so James had to wait until 1880 before he could take on the role.

This position meant that James played a key role in reform. He drafted the 1884 Reform Bill and helped take the 1883 Corrupt Practices Act through Parliament. The Corrupt Practices Act put a limit on how much money could be spent at election time and these expenses had to be published. The act also laid down clear rules about what was not acceptable during election campaigns. Now it was much harder for rich men to buy votes, although it did not completely get rid of corruption. James was criticised for his ‘over-elaborate’ speaking in Parliament, but his legal skills were very important in these reforms.

After the 1885 government James left the Liberal party due to a split over the future of Ireland. In 1895 he was made a lord – Baron James of Hereford – and left the House of Commons. He died in 1911, and is remembered for his loyal support of several party leaders. 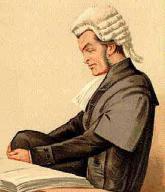 James was a keen sportsman. He was President of the Marylebone Cricket Club in 1889.