John Stuart Mill was one of the leading Victorian economists and philosophers. Born in London, he was the son of the Scottish philosopher James Mill. From a child he was raised to follow in his father’s footsteps, and despite a nervous breakdown at the age of 20, he did. He believed that people should be free from most government control and wrote books on these issues, such as On Liberty.

By the 1860s, Mill had become involved in radical politics and causes such as women’s rights. He was elected to Parliament for Westminster in 1865. He was well-respected in Parliament and played an important role in the reform debates.

He is remembered for being the first MP to argue that women should also be allowed to vote. On 20 May 1867 he introduced an amendment to the Reform Bill which would have replaced the word ‘man’ with ‘person’. This would give women the right to vote on the same terms as men. It was rejected by 194 votes to 73.

Mill lost his seat in 1868 – and he was largely relieved! He continued, with his step-daughter Helen Taylor, to campaign for women’s rights. He published The Subjection of Women in 1869. This argued that there was no justifiable reason for women to have fewer legal rights than men, but the book was very controversial at the time. Mill remained committed to women’s rights and a number of other causes until his death in 1873. It would be many years, however, before the campaigns of the suffragists and suffragettes helped women get the vote. 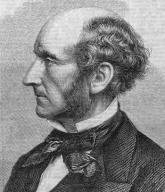 Mill wrote that his wife, Harriet Taylor, was responsible for many of his ideas. The two met when Harriet was still married, and spent nearly twenty years as friends before Harriet’s first husband died.