Thomas Attwood was born in to a middle class Warwickshire manufacturing family. He joined the family bank and for much of his early years was conservative in his politics.

Attwood had, however, a genuine sympathy for the poor. His answer to their problems was to reform the currency, ideas that were rejected at the time as very strange, but today seem less so. When no-one in government would listen to his plans, he believed that if Parliament was reformed, they might do so!

In 1830 he formed the Birmingham Political Union (BPU) and united middle class and working class reformers in a non-violent campaign to support the 1832 Reform Act. He was a good speaker and for a time was considered one of the ‘most influential men in England’.

After the 1832 ‘Great’ Reform Act Attwood was elected to Parliament for Birmingham. He was not very successful in Parliament, however. Without the support of allies or knowledge of how Parliament worked, few MPs would listen to his ideas about currency. They were soon bored of hearing about them!

Attwood believed further reform was needed, and turned to the growing Chartist movement. Their leaders welcomed him because of his experience with the BPU. Although he had some difficulties accepting the Charter’s Six Points, in particular the demand for every man to be able to vote, he joined Chartist leader Feargus O’Connor on the platform at Glasgow in August 1838 when the first Chartist petition was launched.

Attwood was known as a ‘moral force’ Chartist – one who opposed violence. Yet he argued:
‘No blood shall be shed by us; but if our enemies shed blood—if they attack the people—they must take the consequences on their own heads’

Attwood presented the first Chartist petition, which had 1,280,958 signatures, to Parliament in June 1839. In July, he suggested that Parliament form a committee to discuss it, but this was rejected by 235 votes to 46. The rejection of the petition led to rioting across the country, also in Birmingham and an armed uprising in Newport, South Wales (see Monmouth).

Attwood retired as an MP the year after and mostly stood back from political life, disappointed with the failure of his efforts. He died, probably of Parkinson’s disease, in 1856. 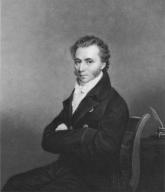 Attwood was described by future Prime Minister Benjamin Disraeli as ‘a provincial banker labouring under a financial monomania.’