Bristol in 1831 had a population of 59,034, but only 6,385 men could vote. They sent two MPs to Parliament, but tensions were high. The city faced economic difficulties after it was overtaken by other cities, like Liverpool, as the most important port in England.

In 1831 the House of Lords rejected the Reform Bill. This rejection led to rioting around the country. In Nottingham, the castle (home to the anti-reform Duke of Newcastle) was attacked.

In Bristol, the riots lasted for three days at the end of October, and caused a large amount of damage. They began when an anti-reform judge, Sir Charles Wetherell, arrived at a court on 29 October. Wetherall’s carriage was pelted by stones and a mob soon cornered him in the city’s Mansion House. He was forced to flee from the rooftop.

The violence continued. On the next day the rioters attacked the Mansion House, gaol [prison] and Bishop’s palace. Troops and militiamen refused to open fire on the rioters. On the third day the army commander in Bristol, Lieutenant-Colonel Brereton, decided it was time to send in the troops. Hundreds were said to have died in the violence.

Many rioters were arrested: 4 were executed, 29 transported to Australia and 43 imprisoned. The militia commander, Brereton, was court-martialled for being too ‘cautious and compassionate’ to the rioters. Before a judgement was reached Brereton committed suicide.

Over £300,000 worth of damage was caused in Bristol. Events in the city shocked many, and lots of people feared that this violence would spread if the 1830-32 Parliament(s) did not pass the Reform Bill. The riots helped convince the King to back Earl Grey in his plans for reform.

On 18 June 1832 a procession was held by organisations in the city to mark the passing of the Reform Act. The number of people who could vote in 1832 rose to 10,309. However, it was politics as usual in the town: in 1832 election the MPs were a Liberal and the ‘Ultra-Tory’, Sir Richard Vyvyan. 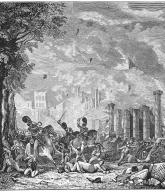 There were plenty of women who rioted in Bristol in 1831. The Spectator reported on 5 November that the ‘lower orders of females were particularly vociferous.’ Despite this no woman would be able to vote until 1918.