Before 1832 Glasgow was one of the towns represented in Parliament in the ‘Clyde Burghs’ constituency. After 1832 the town itself was given two MPs.  The city had been an important port from the 18th century onwards, and in the nineteenth century it rapidly industrialised. By the 1820s its population was bigger than Edinburgh and its industries included shipbuilding, engineering and textiles.

Because of this, Glasgow was an important working class centre. In May 1838 the town’s unions organised a mass rally on Glasgow Green. A number of people spoke at the meeting, including Thomas Attwood and Feargus O’Connor, but it was later remembered for the launch of the ‘People’s Charter’.

The Charter had been mostly written by William Lovett, a former draper and founder member of the London Working Men’s Association. He decided to present working class political demands in a Charter. His ‘Six Points’ were:

At Glasgow Green, the charter was announced to the public for the first time. 150,000 people attended the rally, and the Six Points soon caught on. The Chartists, as they became known, launched a mass petition across the country collecting signatures in support. Rallies took place in many of the industrial towns of Britain.

The Six Points united many people in the working class with different political ideas. Taken together, they were reforms that would allow the working classes to both vote and become MPs – for example by making sure that MPs were paid.

The first Charter collected over 1 million signatures before it was presented to Parliament by Thomas Attwood. After it was rejected, the Chartist movement began to split over what moves to take next.

Although the Six Points were not implemented in the 1840s, only one – annual elections – was not in place by 1918. 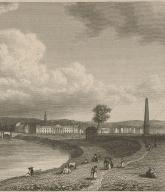 Glasgow from the Green, c19th Century