In the early 19th century there were a number of new, growing towns in Lancashire, thanks to the Industrial Revolution and the growing cotton industry. However, many of these towns did not have their own MP, and were only represented in Parliament by two county MPs who sat for the whole county. The area now known as Greater Manchester had a population of around one million at this time but still did not have an MP.

Many middle and working class people in Manchester were upset by their lack of representation in Parliament. After the end of the Napoleonic Wars many of these people also faced economic problems. Food prices were being kept high by government measures, known as the Corn Laws, that prevented cheap corn from being imported in to Britain. Unemployment was high thanks to a slump in trade after the war and the return of former soldiers.

With no welfare state to support them, and no MP to argue for changes to the laws, many working people turned to radical protest. They formed reform organisations and published their ideas in local newspapers.

One of these societies, the Manchester Political Union, organised a pro-reform rally at St Peter’s Fields, Manchester. They invited the famous Henry Hunt as the star speaker, and told those attending to be peaceful: they should not bring weapons or alcohol. Crowds of between 60,000 and 80,000 men, women and children, many dressed in their ‘Sunday best’, arrived to hear the speakers.

However, the size of the meetings caused the local authorities to panic. Before any speeches had taken place they decided to arrest the speakers and to remove the crowds. Militia cavalrymen, armed with sabres (swords), charged in to the crowds. The figures vary but at least 11 people died and between 400 and 600 were injured. Onlookers were horrified and the violence was widely reported across the country. Hunt and his fellow-speakers were arrested.

The event became known as the ‘Peterloo massacre’, named after the 1815 Battle of Waterloo. Privately, even the Tory government thought the local authorities had acted stupidly. However, the events led to even more legislation against radical groups. The ‘Six Acts’ prevented radical groups meeting, imposed taxes on their newspapers and tightened rules on censorship. Peterloo convinced many in the Whig opposition that Parliamentary reform was needed.

In the 1832 Great Reform Act, Manchester gained its first MPs. 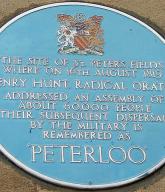 The Free Trade Hall now stands on the site of St Peter’s Fields. For many years it was a concert hall, it is now a hotel.